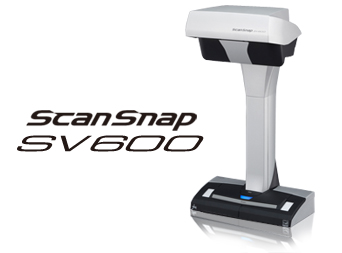 ScanSnap SV600, which was released in September 2013, has received high acclaim as an innovative document scanner that offers a new perspective on scanning. As announced in the release, four Mac Software are now available as a free download for SV600 users from today. All four software, including the driver software “ScanSnap Manager”, support the latest OS X v10.9, so users can rest assured to use the scanner.

The driver software, ScanSnap Manager, enables SV600 to scan in Mac OS environment. The driver includes “Book Image Correction” function to correct the distortion caused by the curve of an opened book. Together with the “Page Turning Detection” function, various media can be digitized easily.

4. ABBYY FineReader for ScanSnap™ – Transform image data into Word and other format (for Mac OS)

Using the OCR technology incorporated in ABBYY FineReader for ScanSnap™ , users can transform image data into editable Word, Excel® and PowerPoint® files for further applications in the office.

The software can be downloaded from the ScanSnap Support Site. Follow the instructions on the “Software Downloads” web page to download the setup file. (The software is for SV600 user only. It is necessary to input the user registration number and product serial number of SV600.)

[Copyright] The scanner is designed to digitize materials that can be reproduced lawfully, in accordance with applicable copyright regulations and other laws. ScanSnap users are responsible for how they use this scanner. It is imperative that ScanSnap users comply with all applicable local rules and laws, including, without limitation, copyright laws when using this scanner.