-Equipped with a Wi-Fi Function, it Can Link Directly with Smartphones/Tablets- 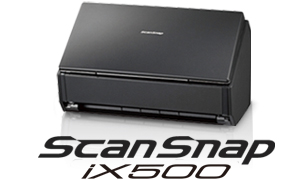 More and more customers around the world choose ScanSnap series personal scanners because they deliver speedy, "One Touch" document digitization to PDF files. The successor to the best-selling model "S1500/S1500M", "iX500" is a next-generation scanner that significantly expands the cloud market by linking with cloud services and smartphones/tablets. The external appearance has been renewed as a sophisticated and smart design themed in piano black. The iX500 is equipped with a newly developed image-processing engine "GI" processor[*2] that supports the latest interfaces (Wi-Fi, USB3.0). In addition to being able to scan directly from a smartphone/tablet, the scan speed and paper feeding performance are significantly upgraded. In addition, the software has been enhanced, so that the iX500 is even more convenient to use than its predecessor. Not only have the functions and performance been improved, but also the next-generation scanner iX500 enables you to efficiently digitize documents in addition to being "simple", "compact", and "speedy", and will continue to evolve your lifestyle.

1. The scan environment has been upgraded centered around a newly developed image processing engine "GI" processor

The hardware has been revolutionized, equipping the iX500 with an image processing engine "GI" processor and brake rollers suitable for scanning large volumes of documents at high speed. Thus, you can digitize documents both carefree and efficiently.

2. Usability of software has been significantly improved

Latest version of "ScanSnap Connect Application" to be launched

"ScanSnap Connect Application" will be available as a free download [*9] from Google Play and App Store. Products equipped with iOS 4.3 or later or Android? OS 2.2 or later are supported. PFU does not guarantee that ScanSnap Connect Application will work on all devices running Android OS 2.2 or later. Please check the following Fujitsu global site product information page described below for latest support information.