Three Fujitsu Semiconductor engineers, who developed ferroelectric memory used in smart card, smart meter, authentication devices, etc, have received The Minister of Education, Culture, Sports, Science and Technology award and The 61th Promotion Foundation for Electrical Science and Engineering Award (Ohm Technology Award). The former award delivered to only one recipient selected among the later winners. The award ceremony was held on November 27th, 2013 at THE GAKUSHI KAIKAN in Tokyo.

The Promotion Foundation for Electrical Science and Engineering Award

The Promotion Foundation for Electrical Science and Engineering has awarded persons who contribute to the promotion of Japanese electro scientific technology since 1952. The award winner has already counted a total of 1,702 cases, most of 3,773 people.

Smart cards and mobile devices, which have gained popularity since the 1990's, have long required memories that store the data even when the power is switched off (non-volatility), operate at low power in high speed, and have high write-erase cycle endurance. Ferroelectric Random Access Memory (FRAM) meets these requirements, but attempts, in both Japan and the United States, to manufacture the memory using the conventional semiconductor process have not been necessarily successful until early 2000's.Oxide ferroelectric material used in the FRAMs is reduced by hydrogen gas which is generated during the conventional semiconductor process, and the reaction causes the degradation of the ferroelectricity. The Fujitsu team developed H2-barrier film to prevent the reduction of oxide ferroelectric material. This helped successfully start the mass production of FRAM in 1999. To achieve high density and low voltage operable FRAM, they have improved ferroelectric capacitor, which has realized 1.8V operation and 4 Mb FRAM. The FRAM they developed has excellent electronic properties in comparison with the conventional FLASH memory. It is 10-million times faster in write/erase, 100-million times more robust in write-read endurance, and 400 times lower in power consumption. Therefore, FRAM has been used not only in smart cards and mobile devices but also in Radio Frequency Identification (RFID) tags equipped with large density memory, authentication devices, and alternate memory for battery back-up Static RAM (SRAM). FRAM is expected to be applied to RFID tags attached to medical equipment which needs sterilization by radioactive irradiation since FRAM has been proven to have a much higher resistance to radioactive irradiation than FLASH memory. Although FRAM has already become a basic memory sustaining Information Technology (IT) for secure social networking, one of the most important challenges for FRAM is “scaling” or to decrease cell area. The team have already developed the next generation FRAM with a cell area that is much smaller than that of current commercialized FRAMs. This technology will drastically reduce FRAM fabrication cost and dramatically enhance FRAM-market growth. 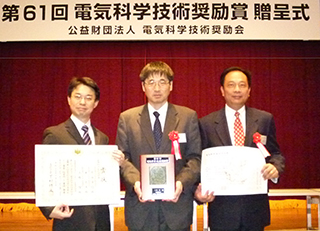