Commendation for Science and Technnology by MEXT (Research Category)

Modern servers and supercomputers use large-scale parallel architecture in which numerous processors are connected to process big data and compute massive scientific calculations. Maximizing the performance of these systems requires not only that individual processors run fast but also that the data be moved quickly between them. In the past, data transfer speeds between processors, either in the form of electrical or optical signals, have been limited to 20 Gbps (gigabits per second), due to significant waveform distortions. Another problem has been that higher transmission speeds have required more power.

This research successfully developed an equalizer circuit that compensates for distortions of the electric signals in low frequency as well as high frequency, and also a control circuit that automatically adjusts the compensation for each of several thousand signal lines in a system. In addition, this research produced a circuit that drives optical modulators at high speed and in low power for optical transmission systems.

This research has enabled high-speed electrical and optical signal transmission at 25 Gbps or higher in low power. It also supports large-scale systems with numerous signal lines. These results will contribute to building higher-performance systems used for big data and scientific calculations, and their reduced power demands will help lighten environmental footprints, including reducing CO2 emissions.

Award certificate from the Minister of Education, Culture, Sports, Science and Technology. 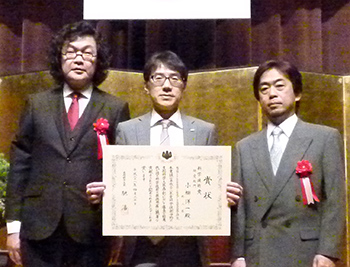