Commendation for Science and Technology by MEXT (Development Category)

The degradation of voice quality due to ambient noise is a problem when using voice recognition technology to control devices in moving cars, and for outdoor conversations on mobile phones. Arrays that use multiple microphones are an effective way to suppress such noise, but such noise reduction is difficult to achieve with the small units that can be installed in car interiors and mobile phones. This technology effectively suppresses the frequency components of noise that comes from directions and distances other than from the target speaker. The feature of this technology is to suppress only noise in bands that are likely to be perceptible, taking into account not only the properties of waveforms based on the direction and distance of the sound source, but also the auditory properties used by voice recognition and by mobile phones.

Unlike conventional noise suppression technologies, which require a large number of microphones for strict full-band processing, this approach achieves more than 20 dB (less than 1% relative power) of noise suppression in moving cars or on the street, while using only two microphones. These results contribute to greater safety and certainty in device operation when driving, thanks to the in-car microphone array, which improves the voice recognition accuracy in the noisy cabin environment. This will also contribute to quicker responses to accidents, such as in Europe, where it is used as microphones for in-car emergency-information systems. Finally, the microphone array called Super Double Microphone, which is mounted on mobile phones such as the Raku Raku PHONE, contributes to improved mobile-phone usability, thanks to its higher voice quality during phone conversation.

Award certificate from the Minister of Education, Culture, Sports, Science and Technology 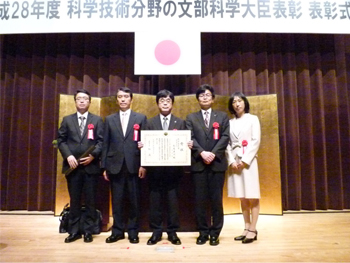 Fujitsu Awarded Two Prizes for Science and Technology from MEXT