Switching commute to cycling through participation to Kilometer Race (Finland)

History of the Kilometer Race 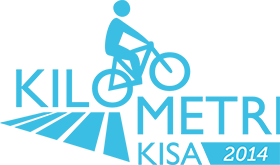 The national Kilometer Race (Kilometrikisa in Finnish) has been organized annually by Cycling Communities Network and Cycling Finland Campaign since 2009. This aims to encourage people to switch to more sustainable means of transport through a team competition; kilometers can be accumulated both by cycling to work and in free time. Fujitsu Finland's cyclists have participated as Fujitsu Team every year.

Alongside with the race the Finnish Red Cross has organized a campaign called “Chain reaction”. They challenge the teams entering the contest to collect 1euro for each 25 kilometers cycled for the Red Cross disaster relief fund. Our cyclists and Fujitsu as employee participated in this campaign for the first time in 2014.

The race lasted from May to the end of September. The Fujitsu Team had 114 cyclists, and exceeded their goal of 125,000 kilometers by almost 10,000 kilometers. Per participant our team's average total amount was 1,182 kilometers. As for the Red Cross Chain Reaction campaign, we donated 10,000 euros. In 2014 race had more than 2 400 teams with nearly 29 000 cyclists, and gathered over 84 000 euros; we were the biggest donator. 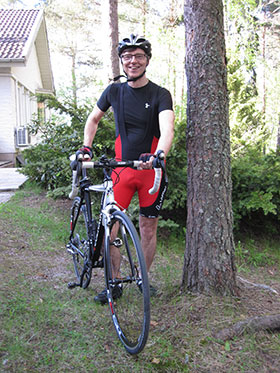 "This time, we decided to participate in the Red Cross Chain Reaction campaign which raises funds for health projects in developing countries. We set an overall target of 125,000 kilometers and 5,000 euros by the team members themselves. Fujitsu Finland doubled the sum and all in all we donated 10,000 euros to the Finnish Red Cross. A great act – a big thank you to all the cyclists and Fujitsu!"

I'm a 41-year-old father of three and live in the city of Turku in western Finland.

For me cycling is a way of life. I have never owned a car. Sometimes, however, I'm forced to borrow or rent a car if my bike trailer isn't big enough for specific transportation needs; the journey is too long for the bike or too difficult for using public transportation.

A couple of years ago, my commute to work was just a couple of miles but after moving to a detached house it was extended to seven and a half. My way to the office runs diagonally through the center of Turku so I have a variety of route options. All in all, the bike is a very handy vehicle to use in a city environment.

I ride my bike almost every day throughout the year, just as our whole family of five does. Our former home was near to the kids' school so they walked, but after moving they took up bikes as the distance was extended to five kilometers. None of them want to use the bus anymore even though they would have that option as well. My wife also commutes commute by bicycle.

I have two bikes. I got a road bike for my 40th birthday present. I like to ride that one just for fun. For winter and rain and going to the shops I have a steady hybrid which can also be attached to the trailer if I need to transport more stuff.

I recommend all cyclists to invest in decent gear. The most important for me has been a cycling rain suit, a bicycle trailer and clipless pedals with cycling shoes. You should also remember to always keep the tires properly aired. This way you can peddle lightly.

For me, cycling is not really a hobby. Like someone driving a car, I don't see riding my bike as anything the special. It's a means to get around.

Of course, a 15 km bike ride daily is also a convenient way to stay in shape. And I do appreciate the ecological factor in not driving a car.