Using Supercomputers for Safer Heart Surgery [ The University of Tokyo ]

The University of Tokyo and Fujitsu have jointly developed a heart simulator visualizing cardiac motion at the cellular level. The ‘K computer'(*1) performed the complex calculations modeling the motion of 640,000 cells to simulate the mechanism of the heart. In the future the simulator will enable doctors to plan for surgery more effectively by predicting the results of their interventions, and help to discover the causes of diseases, leading to new innovation in healthcare.

“We hope that the cellular-level heart simulations conducted by supercomputers will be introduced to the surgery of congenital heart diseases that are difficult to operate and which require advanced skills.”

Many mysteries in the human body are still unsolved. The mechanism of the heart is one such mystery. MRI, CT scans, electrocardiograms (ECG), and pacemakers are all remarkably advanced, but they can only measure the state of a heart as a whole. They do not show us how each cell is acting, and how they interact in a complex, synchronized way to push blood around our bodies. This complexity means understanding and treating heart problems is a challenge. For instance, ‘dyssynchrony’ is a condition where contractions of left and right ventricles are not properly synchronized. Patients who suffer this are currently given Cardiac Resynchronization Therapy (CRT) which uses a pacemaker to synchronize the timing of contractions. CRT costs a lot, but 30% of CRT operations does not yield the expected result and improve the health of the patient.

The University of Tokyo has been making strides in tackling this issue for many years. Since 2001, Research Professor of Engineering Toshiaki Hisada and Doctor of Medicine Seiryo Sugiura have led a research initiative to reproduce cardiac motion on computer simulations. The team analyzed the biochemical reactions from the huge number of cardiac muscle cells that make up the heart, and created a dynamic and a physical model. In 2008, they began using a supercomputer, developing a simulator to digitize the behavior of the heart, reproducing valve motions and blood flow in the atria and ventricles in detail.

Being able to simulate at such an intricate level of detail has had huge impacts in the treatment of heart disease. Prior to the surgery doctors normally planned the operation carefully by referencing MRI and CT images. However, in case of a ventricular aneurysm, where some of the heart muscle cells have died, MRI and CT scans are not particularly helpful. Doctors decide how much of the heart tissue needs to be removed only when they see the affected area during surgery. The computer simulation, however, allows doctors to accurately analyze the state of the heart prior to the operation and work out how much tissue needs to be taken out. They can estimate the ventricular pressure and how much blood can be pumped per stroke, after the surgery.

While this work was seen as a big success, the team did not rest on their laurels. Professor Hisada wanted to improve the accuracy of the simulator still further, but he now faced a difficult challenge. The precise alignment of heart muscle fibers vary from patient to patient. To understand the exact expansions and contractions of the muscles, the action of every individual muscle cell must be simulated. Only a supercomputer with enormous computational capacity could handle such a complex task. Fujitsu Laboratories were at the same time looking for possible of applications of the K computer, and had been considering the possibility of medical simulation for some time. So the University of Tokyo and Fujitsu agreed in September 2007 to begin research jointly which resulted in March 2014 with the ‘Heart Simulator UT-Heart’. 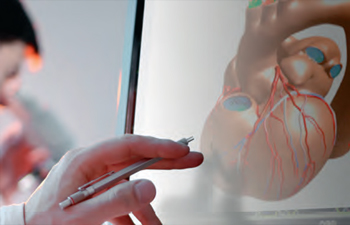 UT-Heart combines 640,000 digitally-modeled cardiac muscle cells with 200,000 degree of freedom in order to simulate the real mechanisms of the heart. The heart contracts by propagating electric signals one cell to another, and UT-Heart exactly simulates this movement. It can not only visualize the blood flow within the capillaries, but also can show a cross sectional view of three dimensional computer graphics which can be explored simply with a few clicks of the mouse. With existing computing technology, it would have taken about three years to simulate the motion of the 640,000 cardiac muscle cells performing one and a half heartbeats. The K computer can finish this calculation in 17 hours. What once seemed impossible has become a reality.

With UT-Heart running on the K computer, the concept of pre-surgical predictions of heart surgery is coming into reality.

The K computer simulated an electrocardiogram of patients who have ventricular dyssynchrony and put the three electronodes of a pacemaker to their heart. The simulation model was created from the MRI data, ECG images, blood pressure and other data. This model produced almost the same electrocardiogram as that of the patients after surgery, proving the simulation works.

UT-Heart can allow doctors to find effective positions for pacemaker electrodes. In some cases, a pacemaker will have no effect in any position, but knowing this allows doctors to recommend alternative treatments. In the future, cell-level simulations are expected to uncover the causes of dilated cardiomyopathy, a condition in which the heart muscle enlarges, resulting in a reduced blood flow from each heartbeat. It is also expected that simulations will help doctors to operate on congenital heart defects which require judgment and skill.

(*1) The K computer:
The supercomputer, which was jointly developed by RIKEN and Fujitsu