On 23rd January 2009, the "Ibuki" greenhouse gas observing satellite(note 1) with the capability for high frequency and high precision measurement of carbon dioxide and methane gases, was launched from the Tanegashima Space Center(note 2).

Fujitsu's development of on-board sensors, for the ground data handling systems of artificial satellites, has taken place over many years. This abundance of accumulated experience coupled with Fujitsu's leading edge ICT technology was instrumental in the progress of the "Ibuki" mission.

Fujitsu is building highly reliable high performance systems to establish the "Ibuki" operational plans, determination and forecasting of orbits, plus the processing and distributing of mission data. These and other continuing Fujitsu initiatives will contribute to preventing global warming(note 3) and achieving the goal of realizing a rich and comfortable life for all. 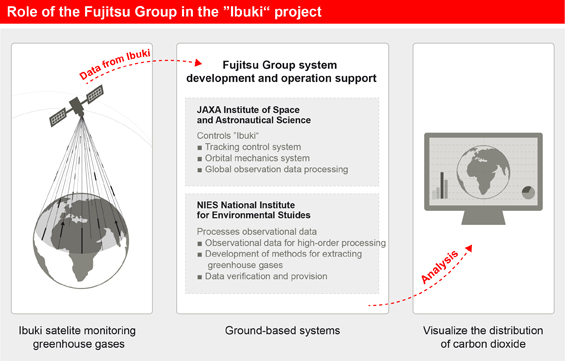 "Ibuki" is a greenhouse gas observation satellite that was launched on 23rd January 2009 by the Japan Aerospace Exploration Agency (JAXA) with the goal of contributing to the "Kyoto Protocol" adopted at the Third Conference of the Parties to the United Nations Framework Convention on Climate Change that was held in Kyoto in 1997. Greenhouse gases are said to be the number one cause of global warming, with carbon dioxide accounting for 60% and methane accounting for 20% of greenhouse gases.

Global warming is a phenomenon where the average temperature of the atmosphere and oceans of the Earth increases over a long period of time.