Set more than 5,000 meters above sea level on the Chajnantor desert plateau in the Chilean Andes, the Atacama Large Millimeter/submillimeter Array (ALMA (note1)) is destined to be the world's most powerful radio telescope — and the largest astronomical project ever conceived. When it becomes fully operational, its 66 high-precision, giant antennas — which act as a single, giant telescope — will gather vast volumes of radio wave data from the distant universe with unprecedented sensitivity and resolution. This will allow scientists to see back in time and explore our cosmic origins. Capturing and processing the information flow from the 7- and 12-meter antenna dishes (some 256 GB per second) requires massive computing power ? on a limited budget. The extreme environment also calls for an extremely robust solution ? the Atacama Desert is reputedly the most arid place on earth. 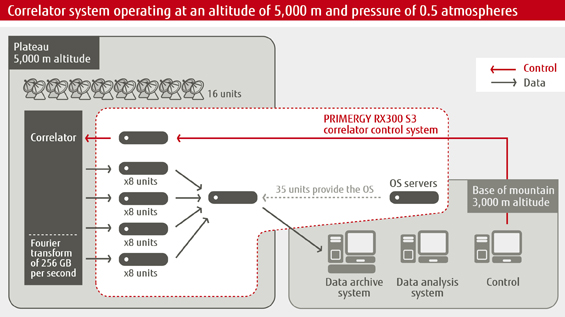 Correlator system operating at an altitude of 5,000 m and pressure of 0.5 atmospheres

ALMA researchers teamed up with Fujitsu to develop the enabling solution some six years ago. Fujitsu's long-standing experience and proven track record in delivering integrated, robust observational control and astronomy data processing systems were the main reasons it was chosen for this international, collaborative project.

Despite numerous observers maintaining that designing a system for such an extreme environment was almost impossible, Fujitsu created a bespoke supercomputer, Atacama Compact Array Correlator for ALMA, to make sense of the huge data stream. Using diskless storage and a sophisticated cooling system, the correlator can perform interference processing in real time at 88 trillion operations per second under hostile desert conditions at a pressure of 0.5 atmospheres. Fujitsu also developed the correlator control system based on PRIMERGY Linux servers. Both the correlators and correlator control system built by Fujitsu are installed on the desert plateau at an altitude of 5,000 m.

Against all the odds, Fujitsu thus succeeded in designing the fastest computer ever used at an astronomical site. It is also the highest in the world, offering stable performance under severe conditions with the added bonus of remote maintenance capabilities from Japan. Minimum observational downtime ensures maximum return on investment, making this a flagship reference for cross-border, collaborative astronomical projects. Other highlights include the cost, performance and flexibility benefits of a field-programmable gate array architecture.

This is a joint, Japan, Europe, America, international cooperation project, to construct the world's largest radio telescope using 66 antennas in an 18.5 km square array in the Atacama Desert (5,000 m altitude) in the Andes mountain range in Chile, South America. This project is aiming for 10 times better performance than the Subaru telescope in the radio waveband.