Fujitsu R&D Center Co., Ltd. (FRDC) announced the development of a high-speed learning technology applicable to the Deep Neural Network (DNN). This technology can effectively reduce the complexity and the size of Deep Neural Network model by using regularization strategy. Moreover, the developed technology uses the quadratic approximation method to determine the optimum path for the DNN model to be converged, thereby improving the speed of learning the DNN model. With this technology, the learning time spent on building a DNN model can be reduced by 50%. It is a general optimization technology applicable to the entire field of machine learning, and can be widely used in various application scenarios.

As an important elementary technologies of artificial intelligence (AI), the deep learning technology has been successfully applied in many fields after its breakthrough in recent years. However, implementing a high performance Deep Neural Network model often requires massive training data and complex model structure, which leads to heavy computation cost and long computation time. In speech recognition field, for example, a practical DNN model is usually composed by tens of thousands of neurons, and thousands of hours of speech data is needed to train such a complex model, which takes days or even dozen of days.

Due to the complexity of the DNN model, the effective learning method has become an important cornerstone for the practical use of the deep learning technology.

Linear approximation, e.g. stochastic gradient descent, is the commonly used learning method for Deep Neural Network, which uses the gradient direction information to guide the DNN model iteratively toward the optimum position. However, low convergence speed is usually resulted due to the inherent zig-zag optimization path in linear approximation strategy, as shown in Fig.1. The quadratic approximation methods, e.g. Newton's gradient descent, can realize convergence along the shortest path, but, it cannot be directly used due to the heavy computation cost in the high-dimensional space.

Fig. 3 illustrates the result of building a DNN model by different learning methods. The DNN model is composed by 4 layers, and it is trained to realize the character recognition function on the benchmark MNIST dataset (10 categories, 50K training samples in this dataset). It is revealed from the handwritten character recognition application that the developed Deep Neural Network learning technology (PROXTONE in Fig.3) can reduce the learning time of the model by at least 50%. 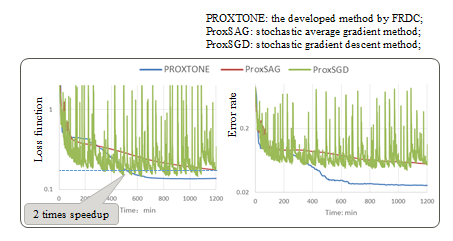 Fujitsu R&D Center plans to further improve the performance of the learning technology along the direction of higher speed and smaller DNN model size, and aims to bring this technology into Fujitsu’s AI business after verifying its effectiveness in different types of deep neural network.