Achieves highest-ever accuracy with a Chinese language database from the Institute of Automation, Chinese Academy of Sciences

This technology will be used as part of Human Centric AI Zinrai, the Fujitsu AI technology.

Details of this technology were announced at the 15th International Conference on Frontiers in Handwriting Recognition (ICFHR2016), held on October 24 in China.

Character recognition is a field where the utilization of AI promises greater task efficiency. Fujitsu Laboratories has several decades of experience in research and development relating to character recognition, and has a large portfolio of technologies, such as machine translation, in the field of Japanese language processing. In September 2015, using AI technologies modeled on the workings of the human brain, Fujitsu announced its successful demonstration of the world’s first technology with a character recognition rate that exceeded that of a human to recognize individual handwritten Chinese characters（*1）.

However, Chinese sentences are made up of strings of complex Chinese characters and when an individual character is not clearly distinguishable, such as in a handwritten form, it is difficult to recognize a character accurately.

Such technologies using AI start off with a supervised sample of characters to enable the system to learn and remember features of multiple character patterns used by humans when recognizing characters. Next, an image of a string of characters would be divided into parts, and by determining the blank spaces would separate the radicals (the components that make up a Chinese character) and have situations where the separated areas would display a single region (top row of Figure 1), and situations when parts from neighboring characters become a region (bottom row of Figure 1). The program then assumes each region represents an individual character, and outputs the candidate character recognition result and its degree of reliability, using a recognition algorithm based on its earlier learning. The closer the degree of reliability is to one, the higher the program’s reliability is of the candidate character. It finally outputs its recognition results by selecting in order the combination that has the highest average degree of reliability (bottom of Figure 1).

With the previous technology, however, there were times when the system would output a high degree of reliability for images that were not characters, such as the component radicals, creating an issue where the system could not correctly separate characters.

This Fujitsu-developed technology generates a high level of reliability only for proper characters. It does this by using a heterogeneous deep learning model, which, in addition to supervised character samples used in conventional technology, uses a newly developed supervised sample of non-characters made up of radicals, and combinations of parts which do not make up characters. Technology features are as follows.

In a heterogeneous deep learning model, two types of supervised samples are used: one for existing characters, and another for non-characters. Compared with the supervised character sample, the supervised non-character sample achieved a huge number by dividing up characters and recombining them. Therefore, by having the system remember the features of non-characters that can easily appear in combinations of neighboring parts in Chinese sentences, Fujitsu developed technology that can effectively learn, even with an asymmetrical deep learning model (Figure 2a).

2. Technology to correctly break down handwritten character strings based on degree of reliability

When this technology was benchmarked against a database of handwritten Chinese released in 2010 by the Institute of Automation, Chinese Academy of Sciences (CASIA), which is used as a standard by academic societies, it achieved recognition accuracy of 96.3%, the highest achieved to date, surpassing previous technologies by 5%. As a result, this technology can greatly improve the efficiency of inputting handwritten text.

This technology is effective for languages that have no spacing between words, including Chinese, Japanese, and Korean. It is expected that the recognition accuracy of free-form handwritten text in Japanese will significantly improve by bringing this technology together with Fujitsu Laboratories’ long-accumulated track record of language processing technology for Japanese.

Fujitsu will aim to bring this technology to Zinrai in 2017, Fujitsu’s AI technology platform, and apply it in stages toward a handwritten digital ledger system for Japan and other solutions. 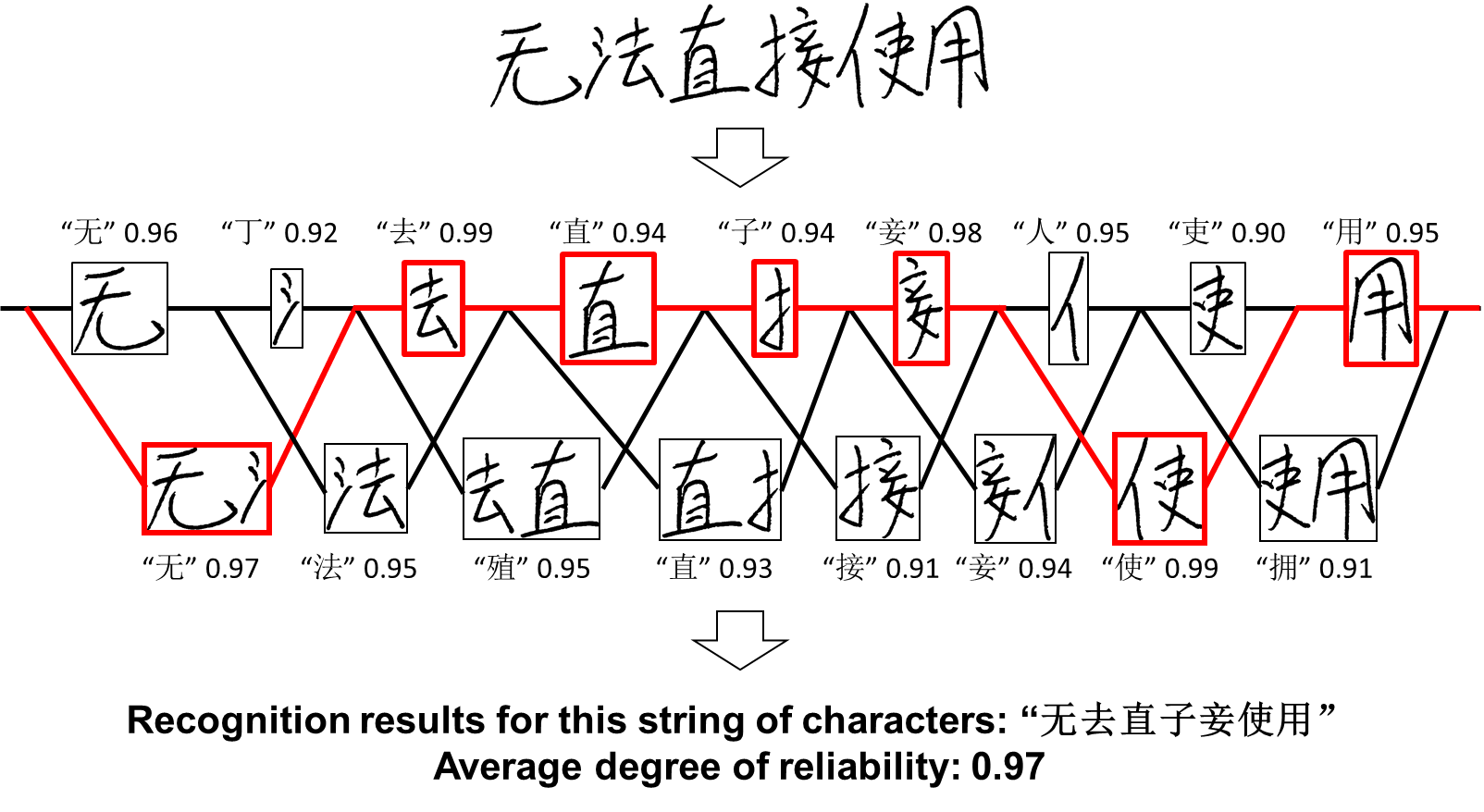 Recognition results for this string of characters: “无去直子妾使用”
Average degree of reliability: 0.97

Figure 1: Recognition results for a string of characters with existing deep learning models 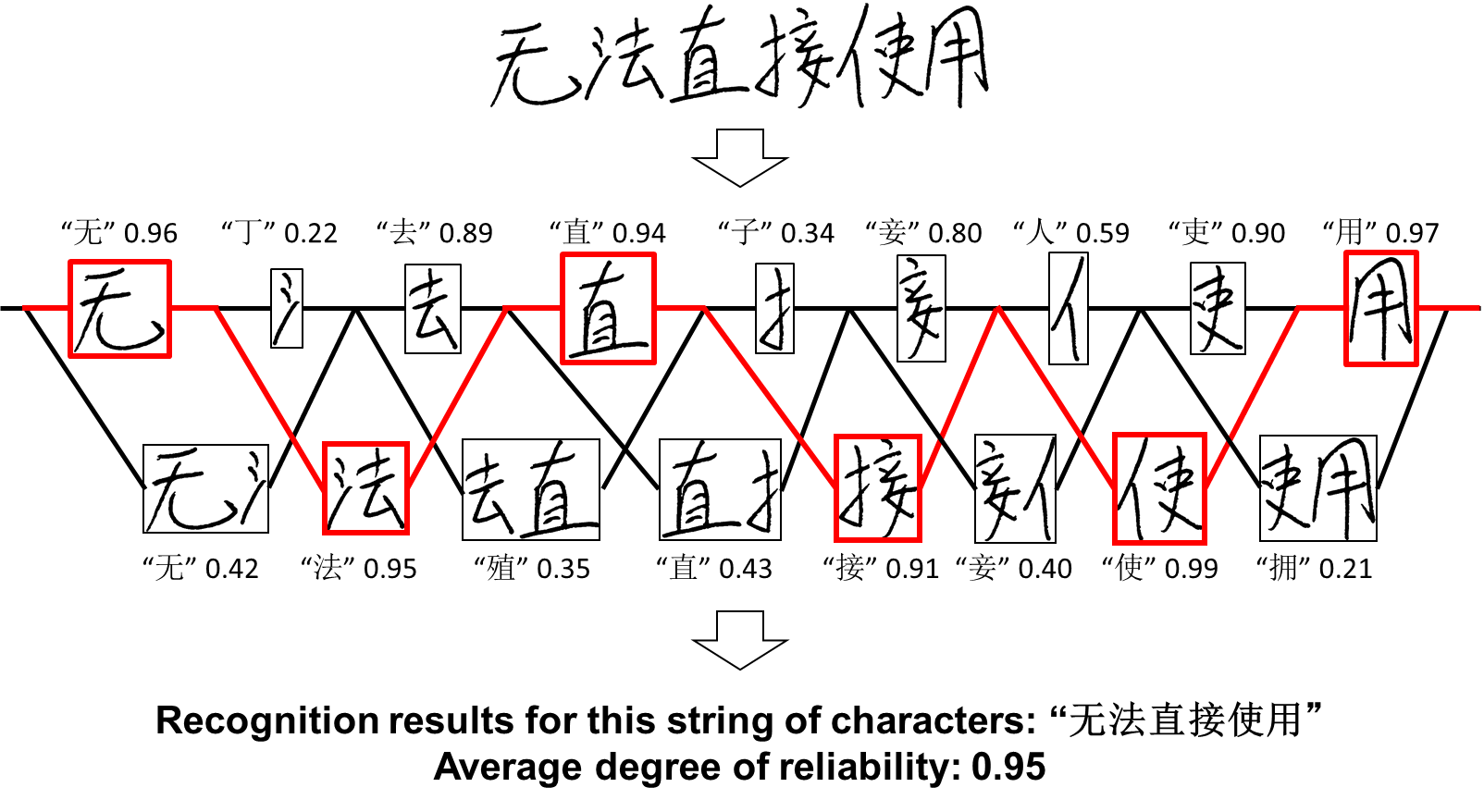 Recognition results for this string of characters: “无法直接使用”
Average degree of reliability: 0.95

Figure 3: Recognition results for a string of characters with the heterogeneous structure deep learning model

Fujitsu is the leading Japanese information and communication technology (ICT) company offering a full range of technology products, solutions and services. Approximately 156,000 Fujitsu people support customers in more than 100 countries. We use our experience and the power of ICT to shape the future of society with our customers. Fujitsu Limited (TSE: 6702) reported consolidated revenues of 4.7 trillion yen (US$41 billion) for the fiscal year ended March 31, 2016. For more information, please seehttp://www.fujitsu.com.