As a technology that achieves video transmission in wireless multi-hop network, a multi-path selection and scheduling technology was developed by Fujitsu Research and Development Center. The conventional technologies select paths with lower hop counts and discard routes with higher hop counts, which are application-agnostic, since the paths with minimum hop counts are not always the least delay ones.

This time, an application-centric technology which can be used for transmission of the multi-description video was developed. The proposed routing technology had multi-path selection and scheduling feature, and it can select paths to transmit data with different priorities under the consideration of actual delay of the paths. In addition, the path switching scheme will be used to respond to the changes in the network environment.

As a result, the packet delivery ratio of I-frame of video data was able to improve, and the end-to-end delay was able to be reduced. So the effective transmission of the video can be achieved in wireless multi-hop network. In this technology, these kind of things can be expected in improving the quality of video transmission.

The detailed technical has been published in the 12th International Wireless Communications and Mobile Computing Conference (IWCMC 2016), which held on September 5~9, 2016 in Pafos, Cyprus.

In conventional multi-path routing protocols, the paths with least hop counts will be selected as main path, and those with higher hop counts are discarded or preserved in the routing table as alternate paths of main path in case link failure occurs. For example, in Figure 1 the path 1 and path 2 will be selected as the main path and alternate path in the conventional method, respectively.

These application-agnostic schemes assume that a path with a lower hop count yields lower delay. But the truth is that, there are other data communications in the network, such as voice, audio, and background traffic. All of which may interfere with each other during video transmission.

In addition, the existing methods do not consider the changes of the network environment. As shown in Figure 1, when the path 1 is disturbed by path 3, the quality of video transmission will be seriously affected. For example, the node 1 and node 2 in path 1 will be disturbed by the node 3 and node 4 in the path 3. 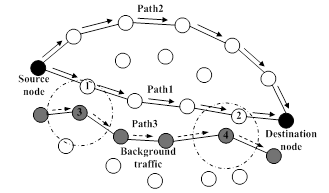 The proposed multi-path selection and scheduling technology takes into account the characteristics of the video data and the actual situation of the wireless channel. As shown in Figure 2, the proposed method is divided into three parts: paths selection, distortion-aware and path scheduling. 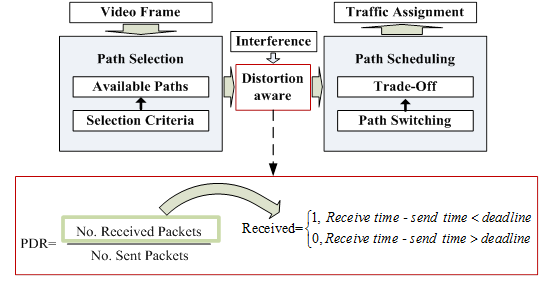 After the network is deployed, the backtracking routing algorithm will be used to find k number of node-disjoint paths. In multiple descriptions coding (MDC), the initial video clip is separated into a sequence of frames (I-, P-, and B-frames) of different importance with respect to quality of recovered video. So in path selection, each video stream is assigned a path according to its frame type (I, B and P).

The change of network environment will affect the data transmission. The quality of the recovered video is affected by both the packet delivery ratio (PDR) and the end to end delay. In view of this problem, the proposed method will detect the change of the network environment by distortion aware, it not only considers the packet delivery ratio, but also considers the timeliness of the data arrival.

The video data transmitted by the source node contains the sending time information. The destination node calculates the packet delivery ratio of I and B/P frames to get the distortion-aware information, and the packets received beyond the deadline are also treated as invalid data packets.

By our method the video is recognizable up to 6 hops, and the coverage area of the network has nine fold gain

Fujitsu Research and Development Center will further study the multi-source and multi- destination video transmission, and explore an effective way to expand the network capacity. At the same time, we will actively seek a meeting point of related technologies and the application requirements of potential users, which aims at achieving practical application of wireless multi-hop network video transmission.