Fujitsu Laboratories Ltd. and Fujitsu R&D Center Co., Ltd. (collectively "Fujitsu") today announced that, to connect multiple datacenters scattered within a metropolitan area with high capacity and at low cost, they have developed a basic architecture for digital-signal processing in optical transceivers transmitting data at 400 gigabits per second over a single wavelength.

Fujitsu have developed new transceiver architecture in which, on the transmitter side, a specially designed reference signal is transmitted, and this is used on the receiving end to effectively compensate for distortion. Fujitsu successfully performed repeaterless transmission tests over a distance of 160 km. This technology accurately compensates for variations in the characteristics of transceiver components and distortions introduced in the transmission path, making it possible to communicate at 400 Gbps per wavelength using inexpensive optical transceiver components.

Details of this technology are being presented at the Optical Fiber Communication Conference and Exhibition (OFC) 2016, opening March 20 in Anaheim, California.

As 5G mobile networks and the IoT advance, over the next few years it is expected that an era will arrive in which users can access ever more devices and data volumes while enjoying a greater level of real-time services. To achieve that, development work is advancing on distributed computing platforms, in which multiple datacenters are distributed throughout a metropolitan area and connected to work together (Figure 1). There is a need for the fiber-optic networks that will tie these datacenters together to carry more bandwidth, and now R&D activities are underway to go from currently common speeds of 100 Gbps per wavelength, up to 200 Gbps and eventually 400 Gbps.

Until now, achieving 400 Gbps per wavelength has required the use of expensive components that have been optimized and selected for specific purposes. While there are expectations that the price of components for optical transceivers could be brought down by using cheaper parts or by using CMOS technology or silicon photonics technology, which are being developed in parallel, these all have relatively poor performance compared to expensive components that have been optimized and selected for the specific purpose. Due to piece-to-piece performance variations of the components, economically transmitting over distances of roughly 100 km, the distance needed for communications between datacenters, has not been possible using current methods.

To enable cost savings in optical transceivers, Fujitsu has developed a new optical transceiver architecture in which the receiver compensates for distortions, particularly those from transmitters that are expected to significantly degrade performance.

2. New compensation technology in the receiver

Fujitsu successfully tested this technology to transmit data at 400 Gbps over fiber optic lines across 160 km, regarded as a sufficient distance for a wide-area network between datacenters in a metropolitan area (Figure 4). Furthermore, this technology can be applied to compensate for variations in performance when using low-cost components, which has been a problem. These results demonstrate that it will be possible to build a next-generation distributed computing platform using low-cost transceivers that operate at 400 Gbps per wavelength.

Fujitsu Laboratories plans to continue testing the technology combined with silicon photonics technology, and aims to have a practical implementation of a 400 Gbps transceiver in 2019. 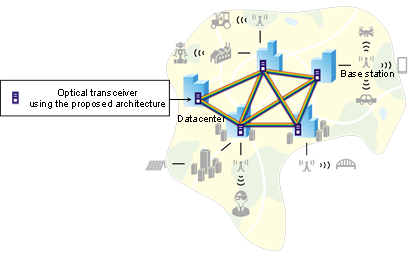 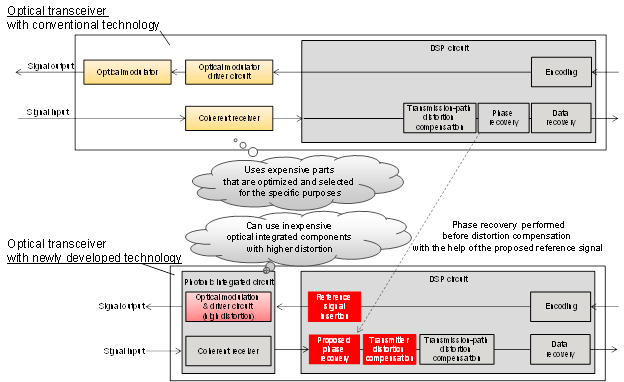 Fujitsu is the leading Japanese information and communication technology (ICT) company, offering a full range of technology products, solutions, and services. Approximately 159,000 Fujitsu people support customers in more than 100 countries. We use our experience and the power of ICT to shape the future of society with our customers. Fujitsu Limited (TSE: 6702) reported consolidated revenues of 4.8 trillion yen (US$40 billion) for the fiscal year ended March 31, 2015.
For more information, please see http://www.fujitsu.com.