Fujitsu Laboratories Ltd. and Fujitsu R&D Center Co., Ltd. today announced the development of a software platform that enables the centralized and stable management of operating status for a variety of sensors, devices, and gateways, as well as the condition of the network that connects them. This platform will support the operation and management of an anticipated and growing array of IoT services.

In developing this new platform, Fujitsu Laboratories and Fujitsu R&D Center have defined common Application Programming Interface (API) to enable consolidated management of IoT device and network status, as well as the monitoring information required to analyze the cause of faults. They have also realized functionality, based on a plug-in format, so as to harmonize differences between common-API and IoT-device interfaces.

In this way, it becomes a simple matter to develop tools for remote monitoring and fault analysis in IoT devices and networks, while enhancing both freedom in device selection and flexibility when systems are scaled up, greatly contributing to stable operations.

Furthermore, with the goal of building an ecosystem to simplify IoT service operation and management, Fujitsu Laboratories and Fujitsu R&D Center are working toward making an international standard of the common API for monitoring information used on this platform.

Recently, there have been efforts to put IoT systems into actual practice, such as by installing sensors in infrastructure for road and bridge maintenance, or using indoor environment sensors to monitor variables such as temperature, humidity, and light levels, as well as power consumption, to control air conditioning and lighting. It is expected that, going forward, the IoT will continue to expand as a new social infrastructure, connecting a huge volume and array of devices to the network so as to constantly provide services, in all sorts of locations, which are essential for people’s safety and peace of mind.

As IoT implementation proceeds, and huge numbers and types of devices are connected and begin to provide services, there will be demand for an efficient way to remotely control these devices through the cloud, such as through an operations management dashboard, as well as for a way to quickly get a handle on and respond to device faults and network trouble.

However, in managing the operations of devices that make up the front-end portion of the IoT, such as IoT devices and gateways, and the network devices that connect them, there is no set format for the information that can be collected from these various devices, and much of this information is not disclosed. Therefore, issues exist with the difficulty in grasping the situation when a fault occurs, as well as the time required to identify and deal with the problem.

Fujitsu Laboratories and Fujitsu R&D Center have now developed a software platform that centrally manages operations information from devices, including IoT devices and gateways and the connecting network devices that make up the system to enable fault analysis (Figure 1). 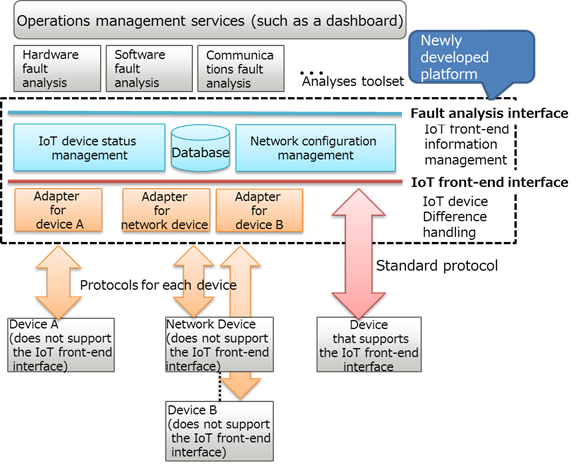 The features of this technology are as follows: 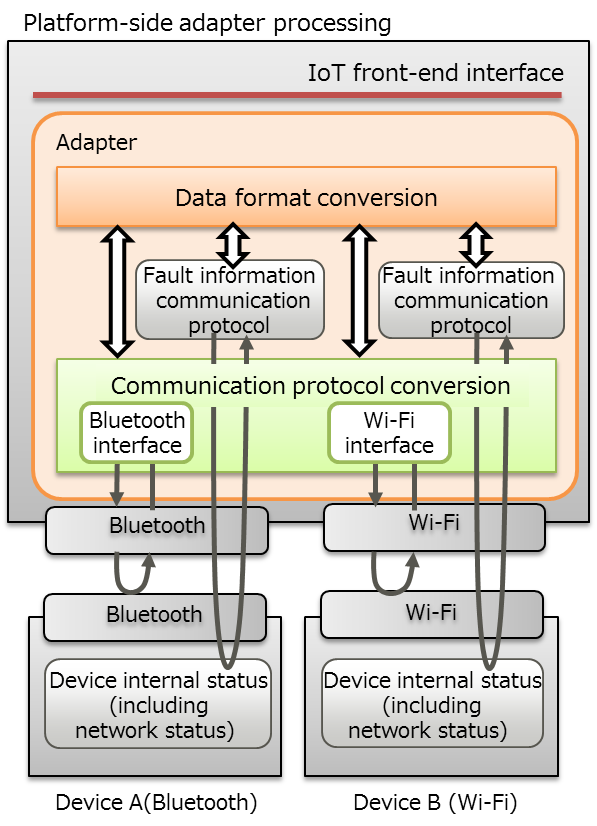 Figure 2: Example of adapter processing when using Bluetooth or Wi-Fi for wireless communications

With this newly developed software platform, Fujitsu Laboratories and Fujitsu R&D Center have defined an IoT front-end API to collect monitoring information from a variety of IoT devices and network equipment in a common process. They have implemented this adapter function, which handles differences in protocol and data format between the IoT front-end API and the API for each device, as programs (plug-ins) that can be added or switched in and out. In addition, they have defined the information to be collected here, extracting information necessary for fault analysis, such as previous responses to trouble.

Fujitsu Laboratories and Fujitsu R&D Center have implemented an IoT front-end information management function that collects information from the IoT front-end API in a database, and enables analysis of problems through a fault analysis API. This makes it possible to provide remote operations management services and analysis tools without regard for the types of devices making up the system.

This software platform primarily runs on gateway devices. The gateways and IoT devices are connected by short-range wireless networks, such as Wi-Fi and Bluetooth, through the adapter.

Furthermore, regarding information-collecting APIs, Fujitsu Laboratories and Fujitsu R&D Center are promoting the standardization of the API related to wireless fault monitoring under IEEE802.1CF.

This technology will simplify the development and provision of monitoring tools and fault analysis tools when building IoT systems comprised of a variety of devices, enabling rapid operations management of IoT services through remote monitoring.

Going forward, Fujitsu Laboratories and Fujitsu R&D Center will add more connected devices and wireless protocols, continuing operational trials on an expanded scale. They aim to implement the technology into product, by the end of fiscal 2016. In addition, with regard to the common APIs for operations monitoring implemented in this platform, they intend to continue activities aimed at international standardization, and accelerate the building of an ecosystem to make IoT service operations management easier.

Fujitsu is the leading Japanese information and communication technology (ICT) company, offering a full range of technology products, solutions, and services. Approximately 159,000 Fujitsu people support customers in more than 100 countries. We use our experience and the power of ICT to shape the future of society with our customers. Fujitsu Limited (TSE: 6702) reported consolidated revenues of 4.8 trillion yen (US$40 billion) for the fiscal year ended March 31, 2015.
For more information, please see http://www.fujitsu.com.