Designed to support industrial equipment and other high-end applications, through four times the performance of the previous products and reduced power consumption

Fujitsu Semiconductor (Shanghai) Co., Ltd. today announced the release of the first line of products in its FM4 Family of 32-bit RISC microcontrollers based on the ARM® Cortex™-M4 processor core. In total, Fujitsu Semiconductor is releasing 84 products in the MB9B560R/460R/360R/160R Series, and sample quantities will be made available starting at the end of July 2013. 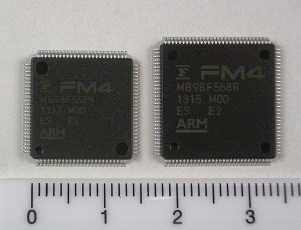 Building on its existing FM3 Family, the FM4 Family offers products with even greater computational performance and enhanced peripheral functionality. The new lineup delivers the same quality and ease of use as the FM3 family to application areas not covered by previous products. These areas require advanced, high-speed computing performance, such as general-purpose inverters, servomotors, programmable logic controllers (PLCs) and other industrial equipment, as well as inverter-based home appliances.

Since launching the FM3 Family in 2010, Fujitsu Semiconductor has sought to offer a microcontroller lineup that is easy to select, easy to employ, and reliable. The company has already brought over 570 products to market, delivering solutions tailored to a wide range of applications. The FM4 Family, which is intended for areas requiring even greater performance and functionality, represents the latest addition to this lineup.

The digital signal processor (DSP) and floating-point unit (FPU) that come standard in the Cortex-M4 core provide the new microcontrollers with the power needed to handle advanced, complicated computations. In addition, the algorithms for operating internal flash memory have been redesigned for greater speed and lower power consumption. Compared to the existing FM3 Family’s High Performance Group, the new products offer at least four times the processing power while reducing the per-frequency power consumption by half.

Improvements and upgrades have also been made to peripheral functions. To enable fine motor control, timer functions have been upgraded, and the A/D converter and other analog circuits have undergone across-the-board revisions. In terms of communications functionality, the communications IP has been improved for high-speed serial data communications, and DSTC (Descriptor System data Transfer Controller) functionality has been added to reduce CPU workload. In terms of external memory connectivity, the FM4 Family continues to support SRAM, NOR flash and NAND flash, in addition to providing added support for SDRAM (Synchronous Dynamic RAM) and a newly included SD card controller.

In addition to the aforementioned features, the new lineup continues to leverage the rich selection of time-tested functions found in the FM3 Family, such as compatibility with both 3V and 5V power supplies and work memory that eliminates the need for external EEPROMs. In maintaining the same ease of use as previous generations, the FM4 Family provides support for even more advanced applications.

Given the different combinations of flash memory capacity and pin counts, the new lineup includes a total of 84 product variations from four series. Going forward, Fujitsu Semiconductor plans to expand the lineup with the addition of products featuring higher-capacity flash memory, Ethernet MAC for factory automation networking devices, and I2S and HDMI-CEC for audio equipment.

Moreover, Fujitsu Semiconductor also plans to release the FM0+ family of microcontrollers for low-cost, ultra-low-power applications. By equipping the FM4 Family, FM3 Family, and FM0+ Family with the latest Cortex-M series cores across the board, not only will it allow users to select the optimal products for an even wider range of applications than before, users will also be able to smoothly transition between device types thanks to the seamless scalability delivered by compatibility among each core’s instruction sets.

Fujitsu Semiconductor plans to exhibit the new products at Embedded Technology West 2013, to be held beginning June 13, 2013 at INTEX Osaka.

Because the calendar circuit and 32-kHz generator circuit are on their own independent power supplies, the current required when running the real time clock (RTC) can be held to roughly 1.5 µA. This allows devices in the family to be used as power supply controllers as well.

The analog circuitry has been redesigned from the ground up. The accuracy of internal oscillators has been held to ±2% thanks to a trimming function; the D/A converter can convert with 12-bit resolution; and the A/D converter features twice the conversion speed as before.

The timer for three-phase motors, known as a multifunction timer, features a number of enhanced timer functions, including support for asymmetric pulse-width modulation (PWM) waveform output and multiple A/D start triggers. At the same time, the minimum resolution is improved to 6.25ns.

Together with the improvements to the A/D converter, these enhanced timer functions enable even more precise motor control while helping to improve the energy efficiency of motorized devices such as industrial equipment and household appliances.

To accelerate SPI communications, support has been added for data transfers at up to 20 MHz. Moreover, variable data lengths have now been expanded from the previous maximum of 9 bits to 16 bits.

A DSTC circuit has been added to enable high-speed data transfers that bypass the CPU. This circuit uses a descriptor method in which, by following descriptor commands previously constructed in memory, it can directly access memory and peripheral devices to transfer data. Through sequential operations, it is possible to reduce the size of software (ROM capacity) and reduce power consumption when the system is running.

In terms of external memory connectivity, the FM4 Family continues to support SRAM, NOR flash and NAND flash, in addition to providing added support for SDRAM. It also supports SDIO interfaces, such as SD cards.

7. Offers the same rich resources as the FM3 Family

As with the FM3 Family, the new lineup supports both 3V and 5V power supplies. The work memory (32 KB) included in some FM3 Family products is also embedded as a standard device. It can be used to back up system parameters or data logs, and through the use of an EEPROM emulation library, it can eliminate the need for external EEPROMs. 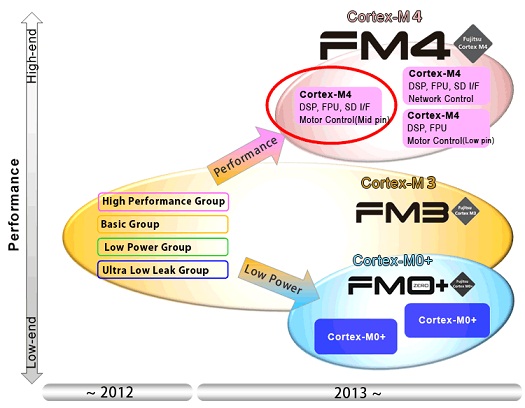