Greatly contributes to improve the environmental performance of HEVs

Fujitsu Semiconductor (Shanghai) Co., Ltd. today announced the release of a new 32-bit microcontroller for automotive applications, MB91F552, which is optimal for use in power supply system for batteries as well as power transmission circuitry in hybrid electric vehicles (HEV). The new product will be made available in sample quantities beginning May 31, 2013. 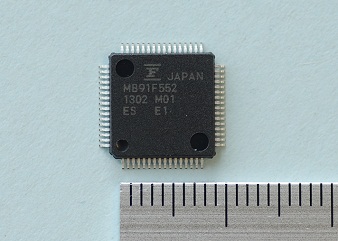 In addition to incorporating optimal functions for control of a digital power supply system, such as a 200MHz PWM module, onto a single microcontroller chip, MB91F552 also supports peak current mode control and substantially contributes to power supply stability and lower system costs.

With HEVs and other electric vehicles that have gained in popularity in recent years, electric power generated during travel is stored in a battery, and this power is then supplied to motors, audio systems, lights, and other on-board electrical components, in addition to being used to charge the vehicle’s auxiliary battery. Currently, in order to supply this stored power to the motor or on-board electrical components, a power supply control system—which manages power conversion circuitry, such as DC/DC converters and DC/AC inverters—is necessary. There is also demand for power supply control ICs that enable stable voltage levels while supporting fluctuations in battery voltage and load fluctuations in the components to which power is being supplied. 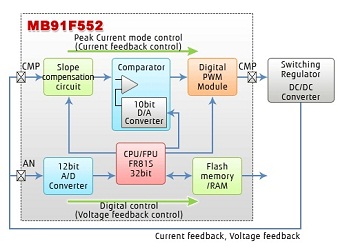 In addition to CAN, multi-function serial and other network control functions, MB91F552 incorporates a host of optimal functions for digital power supply control such as a 200MHz digital PWM module—on a single microcontroller chip. The new chip can easily perform digital power supply control, such as the digitalization of output voltage and other analog signal feedback, as well as computation-based PWM waveform generation. Moreover, while existing power supply systems are composed of a combination of discrete units, making it difficult to make specification changes, with MB91F552, modifications can be made via software. The new microcontroller is able to change operating frequencies and PWM waveform output timing depending on the application, thereby helping to reduce development lead times for power supply systems, optimize system costs, and contribute to system standardization.

With these features, MB91F552 contributes to the better performance and lower cost of the power supply system, improving the environmental performance of HEVs and other electric vehicles, which are expected to grow more and more popular.

In addition to CAN, multi-function serial and other network control functions, MB91F552 incorporates a host of optimal functions for digital power supply control—including a 12-bit A/D converter with 4-channel simultaneous sampling, a floating-point unit (FPU), and a 200MHz digital PWM module—all on a single microcontroller chip. The new chip can easily perform digital power supply control, such as the digitalization of output voltage and other analog signal feedback, as well as computation-based PWM waveform generation.

The comparators and slope compensation circuits included on the MB91F552 provide support for peak current mode control, a method for controlling DC/DC converters and other switched-mode power supplies, in addition to digital control.

Moreover, because it employs two comparator channels, the microcontroller is also able to perform overcurrent protection via input-stage current feedback. This, in turn, contributes to the stability of power supply systems.

While slope compensation circuits have conventionally been incorporated into systems as separate components, MB91F552 integrates them on board the microcontroller. This enables easy adjustment of operating margin for a more stable supply of power. Along with the improved ease of making system-wide adjustments, MB91F552 also reduces external part counts, allowing for the development of high-quality power supply systems at a lower cost.