Leading the development of battery-free electronic devices and wireless nodes 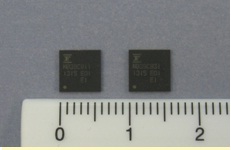 The MB39C811 buck converter features a quiescent current of just 1.5μA and achieves world-leading results in ultra-low power operation. Moreover, the MB39C811 represents the world's first simultaneous use of energy generation from both light and vibration using only one power management IC device.

The MB39C831 boost converter includes a function that automatically responds to changes in the surrounding environment in order to store electrical power, such as harvesting power from light according to variations in ambient light as well as harvesting thermal power according changes in ambient temperature. This function enables the unit to store energy harvested from the different elements at very high levels of efficiency.

Deploying these new products will contribute to new battery-free technologies in areas such as energy management for homes and buildings as well as wireless sensor networks for farms, and will also lead to longer battery lives for portable devices.

Energy harvesting is the process of collecting, or harvesting, minute amounts of unharnessed energy from the surrounding environment, including light and vibration, and converting these to electricity. Energy harvesting is expected to be used as a power source in sensor nodes for wireless sensor networks, among other potential applications, thereby contributing to the realization of a low-carbon society. Fujitsu's two new power management IC's play an extremely important role in the successful commercialization of energy harvesting technologies.

The MB39C811 is a highly efficient DC/DC buck converter that is equipped with an internal low-loss bridge rectifier. By optimizing the circuit design, the MB39C811 achieves ultra-low power operation with a quiescent current of just 1.5μA, contributing to the successful development of battery-free technologies in areas such as sensing devices (Figure 1). Furthermore, the MB39C811 is able to be configured to 8 different output voltages, making it able to supply output currents up to 100mA. The MB39C811 is also the world's first power management IC that can individually perform and manage energy harvesting using both light and vibration elements simultaneously.

The circuit technology employed by the MB39C811 to achieve ultra-low power operation was jointly developed by Fujitsu Semiconductor and Fujitsu Laboratories Limited.

The MB39C831 is a synchronous rectification DC/DC boost converter that uses power obtained from single- and multi-cell solar batteries or thermal electric generators, in order to charge lithium-ion batteries efficiently. The MB39C831 is equipped with an integrated MPPT function, which enables to collect maximum power by tracking harvester's maximum power point that vary according to differences in light levels and temperature. The MB39C831 is also equipped with a safeguard feature to enable safer charging for lithium-ion batteries. The low-voltage circuitry of the MB39C831 allows the system to start up from only 0.35V, making it well suited to a wide range of applications, including wireless sensor networks (Figure 2).

The two products are certified by Fujitsu Group as "Super Green" products, which are recognized as having superior environmental characteristics to others we supply or are available on the market.

3) Achieves vibration-powered energy harvesting in 2-dimensions through the use of dual bridge rectifiers From vibration that occurs in the natural world (along an X-axis direction, Y-axis direction, and Z-axis direction), the MB39C811 is able to gather energy from the directional vibration elements of two axes, leading to a more efficient use of power.

1) Enables highly efficient power collection through MPPT (Maximum Power Point Tracking) functionality For energy harvesters such as solar batteries and thermal electric generators, the output operation (voltage and current values) required to achieve maximum power vary according to changes in the environment, such as with differences in light levels or temperatures. An MPPT is a feature that automatically tracks changes in the optimal operation values and can then adjust output accordingly, which leads to dramatically higher levels of efficiency in energy extraction and supply.

800,000 pieces per month when in mass production (total of two products) 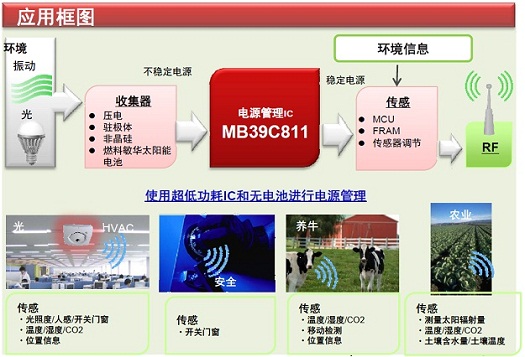 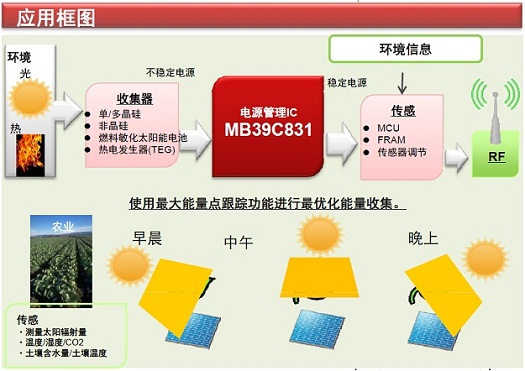