Fujitsu Semiconductor (Shanghai) Co., Ltd. today announced the launch of an upgraded lineup of its FM3 Family of 32-bit general-purpose RISC microcontrollers based on the ARM® Cortex™-M3 processor core. In total, Fujitsu Semiconductor is releasing 38 new products, including the MB9BF529TPMC, which is equipped with high-capacity memory, and the MB9BF121JPMC, which features low pin count packaging. Sample quantities of the new products will incrementally be made available starting May 10, 2013. The new lineup is optimal for system control in household appliances, office automation equipment, and industrial equipment.

Since first announcing the FM3 family of 32-bit general-purpose RISC microcontrollers based on the ARM Cortex-M3 core in 2010, Fujitsu Semiconductor has subsequently developed a rich product lineup supporting a broad range of applications.

The Basic Group, which achieves an ideal balance between performance and cost, will be enhanced with the 38 new products including the high-capacity MB9B520T/420T/320T/120T Series, which features up to 1.5MB of flash memory; the low-pin MB9B120J Series, which is available in 32-pin packaging; and the low-power MB9A420L/120L Series, which supports CAN communications. The new lineup is optimal for system control in household appliances, office automation equipment, and industrial equipment.

The MB9B520T/420T/320T/120T Series features a rich assortment of peripheral functions that the FM3 Family is renowned for, including CAN, USB 2.0 Host/Function, and multifunction serial (UART/CSI0/LIN/I2C) and other serial communications features, in addition to a multifunction timer that is capable of inverter control. The series, which is available in variations featuring internal flash memory ranging up to 1.5MB—the highest capacity option in the FM3 Family—is available in 144-pin to 192-pin packages. The series is an optimal choice for inverter control applications in household appliances, such as air conditioners, and in the various motors used in office automation equipment, including printers and copiers, as well as for man-machine interface control in AV equipment. Equipping the high-capacity memory makes it possible to support multiple languages in the display components of AV and office automation equipment.

The new MB9B120J Series is the first product series in the FM3 Family lineup to feature 32-pin packaging. The series is available at operating speeds of up to 72 MHz, which is the highest for the Basic Group of products. It also comes equipped with a multifunction timer capable of inverter control and a high-speed, high-sensitivity 12-bit AD converter, making it an optimal choice for applications in which low-pin inverter control is desirable, such as general-use inverters and motors for low-end industrial equipment, as well as for refrigerators, washing machines, induction heating cookware, and other household appliances. It is also optimal for devices that require a one-to-one motor to microcontroller system architecture.

In addition to leveraging the energy-efficient technology from the FM3 Family’s Low Power Group of products, the MB9A420L/120L Series features CAN communications functionality, a multifunction timer that is capable of inverter control, and a 10-bit DA converter. The series lineup is available in 48-pin to 64-pin packages. It is an optimal option for use in equipment that requires push button tone control, such as elevators, building management applications, and electronic switchboards. 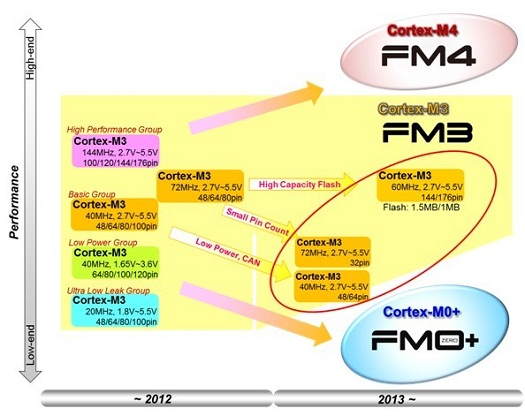