According to the "General norm of terrestrial digital TV receiver ", which was put forward in June 21 this year, AVS (Audio Video Coding Standard) has been identified as a Chinese national standard, and further more, all terrestrial digital receivers must be equipped with AVS decoder chips one year after the general norm was put out. This means that AVS will rise rapidly in a couple of years. During a decade of industrialization process of China's digital audio/video codec standard, Fujitsu had always followed the process, and developed AVS decoder solutions to meet China’s standards and boost the development of Chinese standard of Digital Audio/Video Codec.

In the past years, the standards of TV set-top box terminals were disunion, which dampened the development of terrestrial digital TV industry and weakened the influence of the content industry. This unification of the standards will boost the growth of the industry, especially AVS chips and AVS terminals. With all digital TVs and set-top boxes embedded with AVS functions in 2012, over 400 million Chinese households will be able to play the same video format, which will become a huge milestone for digital television development.

Mr. Andy Chang, vice president of Fujitsu Asia Pacific marketing, said: "We are very pleased to see a good development in Chinese digital audio/video codec standard, and the new opportunities from it. AVS has a number of advantages and it is the mainstay of future development in the area of terrestrial digital TV. It is compression efficiency, best use of channel resources and easy to use. AVS GB compression ratio is twice as much as MPEG-2, and its usage complexity is 30% to 70% less than H. 264. "

Fujitsu’s MB86H06 two-way interaction SD set-top box chip is also based on multi-core CPU architecture with the main CPU frequency up to 324MHz. Its video decoder supports multiple formats, such as, MPEG-2, H.264, AVS, etc. Its audio decoding unit supports multiple advanced audio formats, such as, AAC / HE-AAC and so on. The embedded security area within the chip enables the set-top box to meet very high security requirement in applications. The chip further intensified integration and enhanced support for two-way interaction. In the two-way interactive cable market, we can minimize the cost of BOM by using MB86H06 chip. The chip also includes HDMI function which enables video signals to go to flat-panel TV via HDMI digital interface that bring high-definition viewing experience to viewers even with standard definition set-top box. 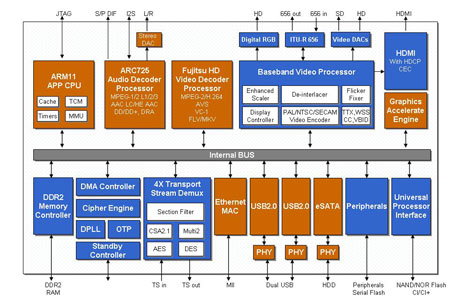 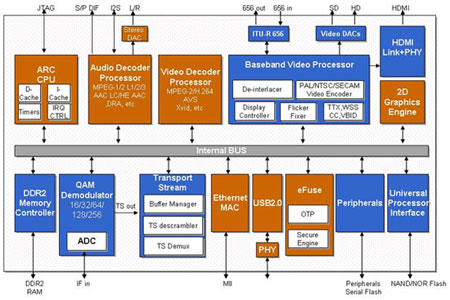 Mr. Andy Chang added: "MB86H61 and MB86H06 are tailored for AVS standard. Today, they have been very successful in Chinese terrestrial and cable TV market. I believe that with the popularity of these two products and the promotion of AVS standard, more and more consumers will enjoy the wonderful audio/video experience which is brought by Fujitsu technology. "

Fujitsu has committed to Chinese market, we are not only concerned about the development of AVS standard, but also partnered with Chinese browser, middleware, CA and other vendors, and has a very good relation with China's cable operators and terrestrial TV operators. In face of China's NGB, triple play, 3D TV and other emerging technologies, Fujitsu will following up actively, and put out the appropriate solutions to meet the changing needs of the users.

All company or product names referenced herein are trademarks or registered trademarks of their respective owners. Information provided in this press release is accurate at time of publication and is subject to change without advance notice.