Fujitsu Semiconductor (Shanghai) Co., Ltd. today announced the development of MB86R11, a LSI chip used in the graphic displays of automotive digital dashboards and car navigation systems. Samples of the new chip will begin shipping at the end of December 2010. 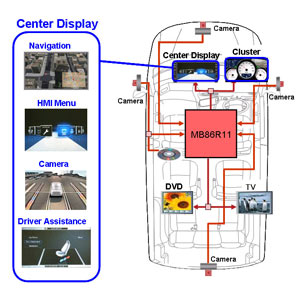 MB86R11 is a single-chip system LSI that combines ARM's latest Cortex-A9™ CPU core with four video inputs, up to 3 display outputs, and various of peripheral interfaces for in automotive applications. MB86R11's rendering performance positions it as an industry leader in the field of graphics display chips for automotive applications.

MB86R11 makes it possible to freely change the content of the display based on the driving scenario, in addition to promoting safe driving by enabling drivers to use camera video to check the entire surroundings of a car, supporting eco-friendly driving, and conveying various information to drivers in an intuitive manner.

In recent years, there has been an increase in devices that display information about the inside and surroundings of an automotive, such as cluster displays, center displays and head-up displays. As a result, there has been demand for high-definition graphics displays for use in display devices that convey information pertaining to the automotive and its surroundings to the driver in the intuitive manner.

In addition, there has been an increased need to connect traditional cluster displays—which show a speedometer, fuel-gauge and other information—with video content like map images and the music data from car entertainment system.

Furthermore, there has been greater demand for automotive cameras to provide visual assistance to drivers. In particular, the passing of legislation in the US requiring car manufacturers to improve the rear visibility in vehicles is expected to accelerate momentum for the widespread application of on-board cameras.

MB86R11 combines the high-performance Cortex-A9™ CPU with four video inputs and up to three display outputs, enabling the high-speed image processing of video data input and output from these interfaces. For example, MB86R11 has made it possible using a single chip to develop a 3D monitoring system that synthesizes and converts a composite image of the synthesizes and converts a composite image of the surroundings of a vehicle in real time from the images of four cameras mounted on the front, rear, left and right of the vehicle.

A function that automatically corrects the image contrast ensures high visibility at night or when high contrast images are in the same scene. In addition, this function makes it possible to correct the image of TV or DVD video, making it clear and bright. When displaying 3D maps in a car navigation system, graphics of not only intersections—which can already be displayed in high quality using existing systems—but also streets and scenery can be displayed using higher-resolution textures.

In the spring of 2011, Fujitsu plans to develop an upgraded version of MB86R11 for even higher definition display panels. In addition, the company plans to offer authoring tools that reduce the work involved in developing human machine interfaces (HMI) that employ graphics.

The four video input ports enable simultaneous processing of various different video images. The input function supports resolution of up to 1,280 x 720 pixels, along with the enlargement/reduction function and the function for converting moving images from interlaced format to progressive format, combine to enable images with minimal noise to be generated.

One of four video ports can handle interlaced input of up to a maximum of 1,920 x 1,080 pixels, enabling the input of digital TV images.

It is equipped with 3 display controllers, 2 of which can multiplex and output 2 screens each, thereby accommodating up to 5 display outputs.

With 8 display levels and an interlayer blending function, the outline of overlaid images on a background map screen dissolves, enabling images to blend into their surroundings. In addition, the dither function and gamma correction function enable high-quality images on displays with different resolution levels and color properties.

In addition, because backlight brightness is dynamically adjusted in accordance with the video stream data, power consumption for the system is reduced.