Fujitsu Semiconductor (Shanghai) Co., Ltd. today announced the release of 44 microcontrollers, the initial offering of chips from its new FM3 family of 32-bit general-purpose RISC microcontrollers using the ARM® Cortex™-M3 core. Samples of the new chips will begin shipping from late November 2010, with volume shipping to be gradually rolled out starting in late January 2011.

FM3 is a family of 32-bit microcontrollers that employs the ARM® Cortex™-M3 global-standard processor core, and incorporates a wide variety of peripheral features which have been cultivated through the Fujitsu’s years of experience developing its FR microcontrollers. In terms of existing markets for 32-bit and 16-bit microcontrollers, the FM3 family will offer the High-Performance MB9BF500/400/300/100 Series for the 32-bit market, which demands high-speed performance, and the Basic MB9AF100 Series for the 16-bit market, which requires superior cost-performance and low power consumption. 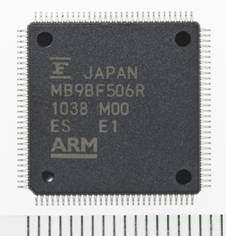 The FM3 family, which employs the high-performance ARM® Cortex™-M3 core, combines Fujitsu’s wealth of experience in implementing ASIC products using ARM® cores with the peripheral features cultivated through the FR microcontroller family, which has gained broad market acceptance. As an initial offering, Fujitsu will begin volume production of a total of 44 products from both the high-performance and basic product lines.

The product lineup has been enhanced to include models for use in high-performance applications that require advanced control, such as factory automation systems, to basic applications, such as major home appliances (air conditioners, refrigerators, washing machines, etc.), digital consumer devices and office automation devices.

The High-Performance MB9BF500/400/300/100 Series is based on a core designed to enable superior processing performance while consuming less power. The series features peripheral functions which have been cultivated through the FR family of microcontrollers and have been optimized for the uses in servo control for factory automation applications and in inverter control, to increase system power efficiency.

Through its high-speed CPU and flash memory, the microcontrollers can respond without time lag at up to 60MHz. In addition, through its high-speed 12-bit A/D converter (1.0μs), as well as its various timers, USB2.0 Host/Function, CAN, and ability to operate with a wide range of power supplies (5.5V to 2.7V), the microcontrollers offer a perfect motor solution for use in servo control for factory automation applications.

Features of the FM3 Family

1.High-reliability, high-speed flash memory is among the industry’s fastest

The microcontrollers are embedded with high-speed, high-reliability NOR flash memory which boasts a long track record and years of refinement. The memory is designed for 100,000 write cycles and can retain data for up to 20 years. Featuring among the fastest memory access in its class, it can respond without time lag at up to 60MHz.

In addition to succeeding the peripheral features from the FR microcontroller family which has a proven reputation in motor control applications, Fujitsu has implemented a wide variety of newly-improved peripheral macros in order to meet the needs of high-precision motor control.