Fujitsu Microelectronic (Shanghai) Co.,Ltd. today announced that it has expanded its F2MC-8FX family of high-performance 8-bit microcontrollers with embedded flash memory to include six products from the MB95390H series of 48-pin chips, which feature functions for controlling brushless DC motors. Samples of the new series will be available from late June 2010, with volume shipping to start in September 2010.

In order to respond to rapidly rising demand in the Japanese and other Asian markets for motor controller microcontrollers with low pin counts, the MB95390H series was designed to be used in kitchen appliances, office equipment, personal care products and other products that require brushless DC motor controllers. 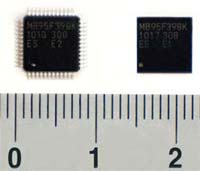 DC motors are utilized in a wide spectrum of electrical products sold in the Japanese and other Asian markets, including kitchen appliances such as microwave ovens and food processors, office equipment such as printers and copiers, and personal-care products such as electric razors and blow dryers. These DC motors account for a significant percentage of a product’s overall cost, and reducing this cost is a high priority for manufacturers. At the same time, requests for reduced noise and greater product longevity have spurred a shift in demand away from brushed DC motors, with their simple construction, towards electronically-controlled brushless DC motors. As a result, it is anticipated that there will be a further expanded market for 8-bit microcontrollers that enable brushless DC motor controllers to be produced at a low cost.

In addition, there is heightened demand not only for brushless DC motor controllers, but also for fine-grained system controllers - including temperature sensors and light sensors - that monitor the various environments surrounding a device. This also includes demand for these controllers to be used in relatively high-end products.

This March, Fujitsu Semiconductor introduced the MB95330H series of 32-pin chips, which feature functions for controlling brushless DC motors, as an addition to its F2MC-8FX family of microcontrollers with embedded secure flash memory.

The company is now offering the MB95390H series, which features a memory capacity of up to 60 KB and 48-pin packaging. Equipped with up to 12 channels of high-precision A/D converters, chips in this series can receive multiple sensor inputs and run complex processing programs.

In addition to functions for controlling brushless DC motors, the new series includes various timer and communications functions that are useful for general-purpose applications, along with high-precision oscillators, thereby significantly contributing to the reduction of parts used in system architectures.