- For use in home healthcare devices, appliances, and industrial equipment -

The new products, which feature very low voltage requirements operating on just 1.8V of power, will be available in sample quantities from early May 2010 and in production from July 2010. 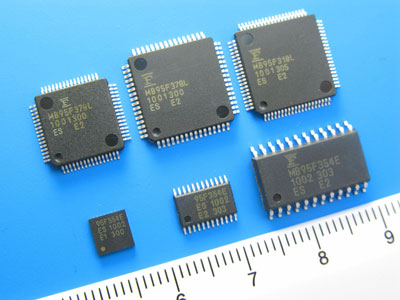 These new products are designed to meet the demand for microcontrollers with low-cost LCD controllers. Applications include home healthcare devices, such as blood-pressure meters and blood-glucose meters - a market that is growing quickly throughout Asia, as well as home appliances, such as washing machines and microwave ovens, and factory automation equipment, such as thermometers and pressure meters.

Growing health awareness has led many households to have at least one blood-pressure meter, blood-glucose meter, or other similar devices. As demand in this market has increased, so too is the variety of products available, ranging from desktop models to portable models. At the same time, unit prices have dropped 20 to 30% over the past few years, putting equipment manufacturers under pressure to reduce part counts and shrink systems as ways to cut costs.

To meet these demands, Fujitsu Semiconductor has augmented its F2MC-8FX family of 8-bit microcontrollers, which already boasts secure embedded flash memory, adding the 64-pin MB95370L series and 80-pin MB95310L series. These series have embedded LCD controllers and, with minimum power requirements of 1.8V, can operate on dry-cell batteries.

In addition to their LCD controllers, the MB95370L and MB95310L series include a full complement of timers and communication functions to make them broadly applicable, along with high-precision A/D converters and oscillator circuits that will help home healthcare equipment makers reduce their part counts.

The MB95350L series also runs on 1.8V and is available with an I2C interface that has up to two channels, making it ideally suited for use as a sub-controller in television or air-conditioning remote-controller.

All the new models use 1-line on-chip debugging, minimizing the number of pins customers need to reserve for debugging when developing their products.