Fujitsu does not only sell products but also solves customers' problems and helps them achieve their business objectives using the company's technology. This has always been Fujitsu's philosophy since its foundation. By placing an emphasis on services, Fujitsu continues to find new ways to deliver on its promise. 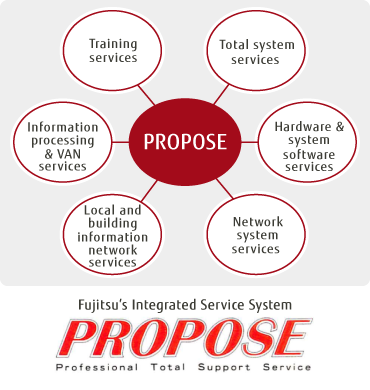 In the 1990's, structural changes in the ICT industry advanced rapidly due to the progress in information technology as is evident from the phrases such as "networking", "open systems", "downsizing" and "multimedia".
In particular, "downsizing" from large mainframe computer systems to highly-functional, high-performance and inexpensive computers as well as "open systems" that realized connecting of computers regardless of the manufacturers by using open systems, such as UNIX or Windows became popular, and the computer industry was gradually shifting away from hardware manufacturing to the provision of software and services.

In June 1992, Fujitsu introduced PROPOSE ("PROfessional total supPOrt SErvice"), a services framework for implementing and supporting information and telecommunication systems. This was the first time that Fujitsu offered customers a selection of service products that were charged separately.

Traditionally, it was assumed by customers that services were incorporated into the price of hardware. Other technology companies, however, soon followed Fujitsu's lead and began developing and delivering independent IT services offerings. The entire industry was transformed. PROPOSE would later earn Fujitsu an award from the Japanese Ministry of International Trade and Industry (now Ministry of Economy, Trade and Industry).

With the relentless penetration of the Internet into every aspect of society, Fujitsu took the helm and launched a new business strategy under the slogan "Everything on the Internet" in 1999.

The Internet has dramatically changed our daily lives, business and society.

All product names and other proper names are trademarks or registered trademarks of their respective companies.