With the FACOM100, Fujitsu had succeeded in developing a computer. But the company still wasn't ready to fully commit itself to the computer business. Fujitsu's fifth president, Kanjiro Okada, then made a crucial decision to bet the company's future on computers. The writing in the photograph, meaning"Infinite Growth" in Japanese, is a corporate slogan espoused by Okada. It was with this spirit of challenge that Okada carried out a series of business reforms aimed at making Fujitsu a leader in the computer industry. 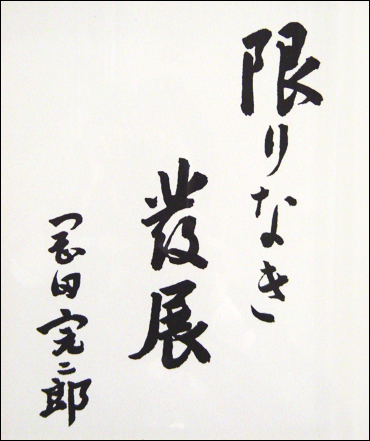 Developing computers was a venture that required an enormous initial investment. Okada, who became president of Fujitsu in 1959, gave his full backing to the initiative. Okada also predicted a future in which telecommunications and electronics would converge. He set up two separate divisions to ensure that the company remained financially sound—one division focused on telecommunications equipment and another dedicated to computers.
In his 1962 New Year's address, Okada announced that he was betting the future of the company on computers and laid out his new"Communications and Electronics" management policy. Considering that the computer division accounted for less than 10% of sales revenue at the time, this was a momentous decision for the company.

The communications division provided the financial support for this venture. Although it lagged in the conversion of mainstream switching systems, the division improved its technological capabilities to help reestablish Fujitsu's reputation for high quality. The division also drove earnings growth by developing submarine coaxial cable systems and through its research and practical application of fully digital transmission systems. At the same time, the computer division continued to roll out new models of its FACOM brand computers one after another. A high point came in 1968, with the introduction of the FACOM230-60, a revolutionary computer with all integrated-circuit logic, two-CPU multiprocessor system and a new operating system. It became a runaway bestseller and won high praise from customers.

The year 1968 was also memorable as the year Fujitsu delivered the first Japanese-made online deposit system to Dai-Ichi Bank (currently Mizuho Bank). The system, which represented a major infrastructure system for Japan's economy, was an enormous breakthrough for Fujitsu's computer business. With this deal, Fujitsu came one step closer to becoming the top computer manufacturer in Japan.

Fujitsu also engineered the semiconductors used in its computers and communications devices. Although the semiconductors were originally supplied solely for Fujitsu's own products, Fujitsu began selling them to other companies both in and outside Japan. All this occurred less than 10 years after Okada declared that he was fully committing the company to building a computer business.