Fujitsu has developed "Vapor and Liquid Loop Cooling (VLLC)", the industry's first cooling technology that utilizes heat of vaporization as a measure to cope with the increase in heating loads as the performance of processors increases. VLLC was applied to the "SPARC 64 XII" processor of the "SPARC M12 Series" announced in April 2017 and achieved about double the cooling efficiency compared with conventional cooling methods. At present, most servers adopt "air cooling" where heat sinks attached to the surface of the processors are cooled with air from a fan. However, as the performance of processors has improved, the amount of heat generated has increased, and the heat sinks that dissipate heat have also become larger. VLLC technology uses water, which has a high heat transport capability, as a refrigerant, and utilizes the phenomenon of vaporization, which enables heat to be efficiently removed by decompressing the interior, resulting in high cooling performance. VLLC enables efficient and focused cooling, contributing to the reduction of fan power consumption.

In addition, "M12-2" of the "M12 Series" has obtained the 80 PLUS® Platinum certification and adopts a power supply unit that achieves power conversion efficiency as high as 94%, contributing to the reduction of power consumption. 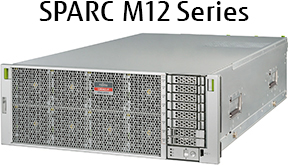 The wireless module FWM7BLZ20 Series is a compact wireless module compatible with Bluetooth version 4.2(Note 1). FWM7BLZ20 adopts a wireless communication LSI with a built-in high processing capability/low power consumption processor and optimizes the energy management function. This means that although it is the same size as conventional products, the power consumption is approximately halved at about 5.4 mA (measured value), the reception sensitivity is -94dBm (measured value), and a communication distance approximately double that of conventional products has been realized. Furthermore, due to the improved processing capability, data analysis such as for sensors, which was done on the server in the past, can be executed within the module, contributing to energy saving in the system by reducing the load on the network. The internal structure of the product was also reviewed and a resource saving of 18% was achieved by reducing weight while maintaining the same antenna characteristics as conventional products.

It is the optimum wireless module for customers who are considering remote maintenance of IoT-related equipment or further reducing the power consumption and increasing the speed of devices equipped with Bluetooth wireless technology.

(Note 1) Bluetooth version 4.2:
Bluetooth is an international standard for short range wireless communication, and in version 4.2 there are extended functions for IoT-related equipment, such as privacy protection functions and expansion of data packet size. 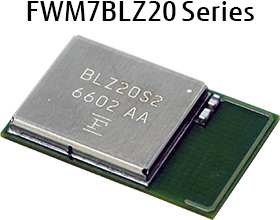 In addition to adopting a CMOS sensor with a higher frame rate (Note 2) than conventional products, for this product Fujitsu reviewed the current drive circuit to improve LED light emission current efficiency and achieve fast output LED current (faster shutter speed). Furthermore, by reducing the number of capture frames, the power consumption per authentication was reduced to one-five.

As for the size of the device, by reducing the optical size, making the lens smaller, and making the LED package denser, a width of 25.0 mm × depth of 25.0 mm × height of 13.0 mm, was achieved, representing a three-fold reduction in volume as compared to conventional products. In addition, by improving the heat resistance level of the parts and extending the operating temperature range from the conventional 0 to 60℃ to -40 to +85℃, the device increases the range of applications for biometric palm authentication, such as embedded equipment and vehicles, which have challenging conditions. Furthermore, compatibility with biometric template data of conventional sensors was realized, and by increasing the authentication rate performance from 1,000 to 10,000 people, the technology can be introduced in larger scale infrastructure.

(Note 2) Frame rate:
A numerical value indicating how many still image frames are recorded per second. The higher the frame rate, the smoother the motion of the subject.

A Smartphone 12% Thinner and 5% Lighter Than Its Predecessor

Fujitsu released the arrows SV F-03H smartphone in July 2016. Featuring a variety of unique design elements, the product achieves both a lightweight, resource-saving structure and a remarkable degree of toughness.

In addition to incorporating a high-density component layout that cuts the board area by 60% relative to the previous model, the device design uses an embedded touch panel with an integrated display to make the device 5% lighter and 12% thinner. The design team also focused on balancing toughness with aesthetic appeal, allowing the device to pass drop tests and other durability assessments as well. The number of repaired units dropped 70% from the last model.

The device's battery life*3 increased to more than three days. The plants manufacturing the smartphones switched to automated lines for the back panel-installing process, thereby contributing to CO2 reductions in the production stage.

*3 Battery life:
The average amount of time that a battery lasts under average smartphone usage conditions (calculated based on data from a June 2015 study by Intage Inc.) (NTT DOCOMO research/manufacturer research)

Use of a magnesium-lithium alloy cover (LCD back cover) for the casing and thin-wall magnesium alloy casting for the top and bottom cover of the unit realized a thin and robust design in addition to lighter weight. Fujitsu also worked with its LCD manufacturer to develop thin glass and thin backlight features. Not only did the collaboration enable a lightweight design, but both collaborators also inspected each other's production lines to ensure maximum quality.

For the device components, too, Fujitsu focused on eliminating unnecessary elements, meticulously crafting a streamlined design and painstakingly minimizing the overall weight down to the last tenth of a gram.

Fujitsu's PRIMERGY RX2540M2 is designed to run in high temperature environments as hot as 45℃. Examples of these cooling features include placing heat-producing components (such as CPUs, memory, and HDD) closer to cooling fans, and using heat sinks as well as power supply units with high cooling efficiency. The power supply unit in the server has received 80 PLUS® Titanium certification. It achieves power conversion efficiency as high as 96% and minimizes power loss and heat from AC/DC conversion. Furthermore, airflow within the server is optimized by using a fan inside the power supply to provide focused cooling for the supply unit.

ASHRAE (the American Society of Heating, Refrigerating, and Air-Conditioning Engineers) has stipulated environmental classes depending on the temperature and humidity ranges for a device's normal operation. Devices operating in 45℃ environments fall into class A4, the highest class defined by ASHRAE. Since PRIMERGY RX2540M2 can operate in a hotter environment than previous 35℃ models, the new product contributes to energy conservation and reduced CO2 emissions.

The Windows-equipped ARROWS Tab Q736/M for corporate clients uses the latest Intel® Core™ i processor and an IGZO energy-saving display to achieve approximately 9.1 hours*1 of battery life. The tablet is Energy Star compliant and achieves an energy efficiency rate of 500% or more (vs. FY2011) based on the Law Concerning the Rational Use of Energy.

Furthermore, by using hybrid molded components made of magnesium alloy and glass fiber reinforced plastic for the internal cover, it was possible to create the sturdy screen while maintaining trimming weight. Post-consumer recycled materials*2 are employed in the glass fiber reinforced plastic. Additionally, the new tablet's internal cover can be reused instead of being disposed of when refurbished. The device's technology includes a fan and heat pipe without sacrificing the waterproof design, thereby enabling efficient cooling of the high-performance internal CPU and also reducing resources used and size. 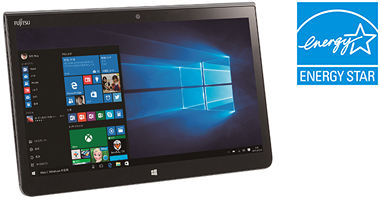 Developing the World's Smallest and Most Efficient AC Adapter

Fujitsu Laboratories Ltd. has developed an AC adapter that allows rapid charging of smartphones and other devices. By using gallium nitride (GaN)*1 High Electron Mobility Transistors (HEMT)*2 (GaN-HEMT) with low dynamic resistance to switching elements, the adapter limits current loss during high speed operation and emits current with optimal timing. When charging from a home outlet, the charging time is approximately one-third*3 that of conventional adapters. The new product is the smallest 12-watt AC adapter (15.6 cm3) in the world and has a world-leading 87% power supply efficiency.

Use of this AC adapter will help limit wasteful electricity consumption and will contribute to reducing CO2. Current plans aim to commercialize the product in FY2017 and promote its use in laptop computers and other devices.

*1 Gallium nitride (GaN): A wide band-gap semiconductor material that operates with a higher breakdown-voltage than semiconductor technologies based on previous materials, such as silicon (Si)- or gallium-arsenide (GaAs)-based technologies.

*2 High Electron Mobility Transistor (HEMT): A field-effect transistor that takes advantage of operation of the electron layer at the boundary between semiconductor materials with different bandgaps, which is relatively rapid compared to that within conventional semiconductors.

*3 Data vary depending on the device being charged.

Tablet-shaped Handheld Terminal Only 70% the Thickness of Previous Models

The FUJITSU Handheld Terminal Patio 720 is shaped like a tablet and ideal for worksite tasks such as placing orders and inspecting products. It features an easy-to-read screen, user friendliness, and a sturdy design, while also being only 18 mm thick (approx. 70% the size of conventional models).

The internal frame, which is the supportive skeleton of the device, was switched from plastic to magnesium alloy in order to make the terminal thinner, yet more robust. Additionally, adopting the Intel Z3745 1.3 GHz (4 core) chip in the CPU greatly reduced the number of components, allowing the double-sided printed circuit board to be concentrated onto a single side.

The battery and external connectors were upgraded as well. The new model adopts a thin, square battery that eliminates unused space. External connectors such as the USB ports have fixed height. Cutting indentations into the printed circuit board allowed the connectors to be seated lower in the board and placed more freely in the vertical plane. 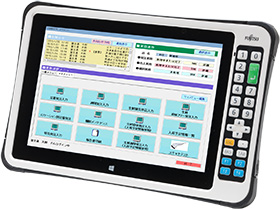 Smartphone" arrows NX F-02H" launched in the winter of 2015, has been reduced the thickness by 0.9 mm (approx. 10%) compared to previous models. In addition to saving the overall parts by 8%,. And this model has used the cutting-edge materials, called nanotech fiber that is as approximately 1.5 times strong as previous resin-based material. As a result, arrows NX F-02H has a greater strength than any other conventional smartphones in spite of thinner design.

The space gained by reducing components enables to put the high-capacity 3390-mAh battery inside. Despite built-in high-resolution display, energy-saving innovations in the display itself and the drawing process minimize battery drain down to the same level as full-HD models. As a result, arrows NX F-02H has been achieved the top-notch actual use time, 99.6 hours*. 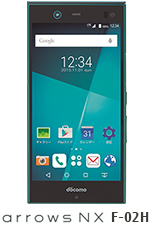