Assessing the damaging effects of malware, which infect organizations to trigger problems, used to involve bringing experts in for time-consuming analyses of network and device logs.

By compressing, storing, and automatically analyzing massive volumes of network communications data, Fujitsu Laboratories has now developed technology that lets users analyze the status of a targeted cyber-attack in a short period of time and shows the whole picture at a glance. The technology collects communications data flowing through the network and then, using the data to infer the commands executed on the PC, connects command operations with specific user information to identify who executed what type of remote control and collect trace information about command operations. Upon detecting a targeted cyber-attack in its home system, the technology extracts affected PCs one after the other and automatically draws the attack status from a comprehensive perspective.

As a result, users can conduct analyses quickly without needing to be an expert, and can implement prompt, far-reaching countermeasures before the damage of an attack can spread. 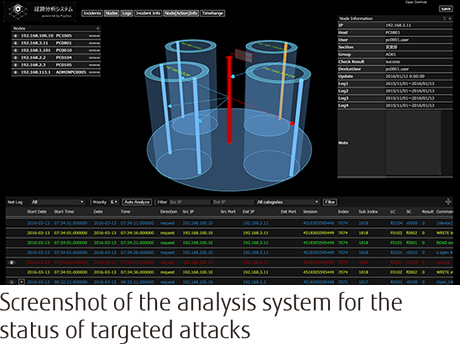 Japan's Amended Act on the Protection of Personal Information, goes into effect in 2017, will make it possible to provide third parties with de-identified personal data-even without the individual's consent. Before providing de-identified data, providers must first ensure it complies with guidelines and evaluate the risk of specific individuals being recognized.

Based on data distribution, Fujitsu Laboratories developed the industry's first technology to automatically search for combinations of attributes that make it easiest to identify individuals-as well as quantifying that ease of identification-in a realistic timeframe. This makes it possible to quickly see which attributes to prioritize for de-identification. Fujitsu Laboratories also developed a technology for calculating potential damage from data leaks and determining compliance with various de-identification guidelines. Users can evaluate risks and implement appropriate de-identification processes quickly and easily.

Currently, reports indicate that data center energy consumption constitutes 1–2% of all electricity use, so better energy conservation is needed, particularly in air-conditioning.

To respond to the dynamic status changes unique to data centers, such as moving information equipment in and out and modifying rack arrangements, Fujitsu Laboratories has developed a highly accurate prediction technology. The innovation sequentially predicts air-conditioning effects, making it possible to reduce the amount of energy that air conditioning consumes. The technology creates a database that incorporates the status of air-conditioning equipment and operates under conditions requiring the system to gather information from two sources: not only choosing measurement data for addressing prediction targets but also automatically selecting at least one variable from the air-conditioning equipment status. By creating a predictive model using the selected variables, the technology successfully improves predictive accuracy.

In recent years, performance requirements for storage systems are increasing due to utilization by businesses of big data and the advance of virtualization. For this reason, "all-flash arrays," capable of extending performance by bundling multiple devices in a high-speed network using high-speed flash devices such as SSDs and the like, have become popular. In all-flash arrays, in order to effectively use the limited flash device capacity, de-duplication technology that eliminates duplicate data when writing to the flash device is installed. However, because there is a need to search for duplicate data via the network connecting the flash devices every time data is written, there was a problem that the response speed when writing decreases as the storage devices become larger and faster.

Fujitsu Laboratories Ltd. has developed a new method that can speed up the response speed by performing de-duplication after the data is written. In addition, since data writing to the memory is performed twice when processing according to the new method is continued, the communication volume increases and the overall processing performance is degraded. For this reason, a technology has been developed to switch automatically between the new method and the conventional method depending on the operational conditions. This technology can speed up response speeds by up to two times, realizing improved response of virtual desktop services and faster database processing times.

Estimated data such as reduction in power consumption and man-hours before and after incorporation of the developed technology into the product or service, and usage conditions of the product or service (scale and usage time) is input. These input items are then multiplied by the corresponding specific CO2 emissions to quantitatively calculate the CO2 reduction of the technology (see diagram).

Moreover, in performing the calculation, a roadmap that clarifies the relationship with the commercialization plan for the product or service in which the technology is incorporated is used to make it possible to estimate how the product or service with the technology will be used by customers. In this way, the data required to quantitatively evaluate CO2 emission reductions is identified.

During a large-scale natural disaster, recovery schedules for essential services, etc. must be formulated quickly. However, since conditions can change even as plans are being formulated, it is difficult to perform the calculations based on massive volumes of data in real time needed to propose an ideal plan that reflects those changing conditions.

Fujitsu Laboratories and the Institute of Mathematics for Industry at Kyushu University have developed a numerical-optimization technology that runs on a supercomputer to efficiently formulate large-scale recovery plans while taking into account complex conditions on the ground, creating real-time scheduling for recovery work. When used with 506 recovery sites and 64 work teams, this technology was able to formulate an appropriate recovery-work schedule in roughly three minutes. 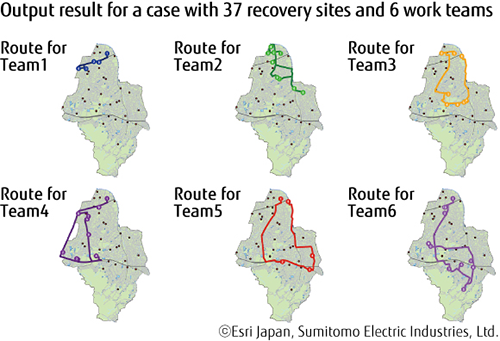 Technology to Visualize the Energy Required to Execute Software

Fujitsu Laboratories Ltd. has developed technology that precisely calculates the energy consumed by software. Servers equipped with Intel-made CPUs can measure power consumption for the CPU as a whole. Until now, however, it was not possible to calculate the energy required to execute software on a core-by-core basis, so it has been difficult to take a software-based approach to reducing power consumption.

Now, Fujitsu Laboratories has developed technology that uses information that can be tracked at the individual core level, such as clock cycles and cache-hit percentages, to estimate energy consumption in detail, down to the program module level. This technology can be used in energy-efficient programming reducing overall server energy usage and, by using spare power and increasing parallelism, boosting software performance. 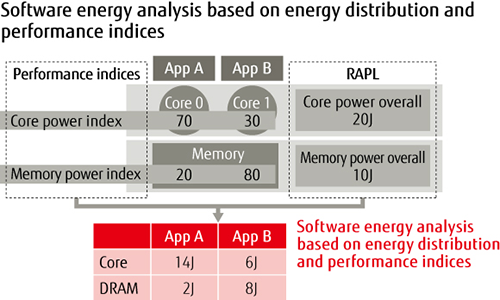 In recent years, the rapid increase in the population of sika deer has led to forest damage from the deer's feeding habits and there are concerns about a loss of biodiversity. Developing countermeasures requires forecasts on the growth of animal distribution. However, it is difficult for researchers to investigate broad and hard-to-reach areas, which has made surveys challenging.

Fujitsu Laboratories has developed a software technology to predict maximum possible mammal populations without a field survey, using publicly available information, such as vegetation maps that display the types and distribution of plants, topographical maps, and climate information, as well as information about the animal's basic biology. In this trial to apply the technology to sika deer, the habitable areas that are suitable for deer to live are calculated. By applying the relationship between sika deer population density and their weight, the maximum possible population number for each square kilometer area is estimated. 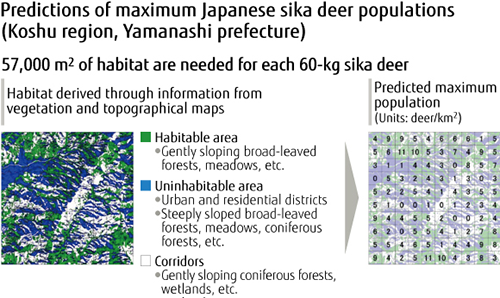