Here are some examples of our efforts to reduce the quantity of industrial waste generated.

The touch panel manufacturing process at Fujitsu Component Limited had problems including a tendency for film to warp. The company established a working group to solve these problems. The group implemented these improvements:

The used stripping solution containing copper emitted during the production of printed circuit boards at our Nagano Plant has a high copper concentration above 30,000 ppm. Since we did not have an independent system for treating this used water, it was being slowly mixed and diluted with lowconcentration used water, treated in our existing system and separated into sludge and water discharged into a river.

However, since a large amount of chemicals was needed in proportion to the concentration levels of the water being diluted and treated, there was still an increased amount of sludge being generated. To address this challenge, Fujitsu Facilities Limited looked into whether equipment could be developed that would effectively recover just the copper and reduce the amount of sludge. Attention focused on a copper recovery apparatus that uses electric current to cause a chemical reaction (electrolyzing the used water) so that copper could be removed. Before adopting the system, we borrowed a test device from the manufacturer and experimented with pH, temperature, and treatment time to see how the system would handle used water with different properties released from each building in the plant. With results showing a very high level of purity for the recovered copper compared to other copper recovery equipment, we judged the system optimal for addressing our existing need.

Furthermore, the initiative extended beyond simply installing the system. We collaborated with a water treatment installation company to review an integrated system that included moving raw water from used water tanks, pre-treating used water, and recovering copper. We were able to build an original, fully automated system at our Nagano plant. Installing this equipment has brought annual industrial waste reductions of 74 tons and has allowed us to decrease the types and amounts of chemicals we use. At Shinko Electric Industries Co., Ltd., we treated all of the flux wastewater used for cleaning circuit boards as industrial waste. By managing intake and release water so that the used water from cleaning is connected to a BOD used water recovery pit, we have been able to create in-house treatment technology. Taking care of treatment on site has led to a reduction in the amount of industrial waste by 114 tons/year. 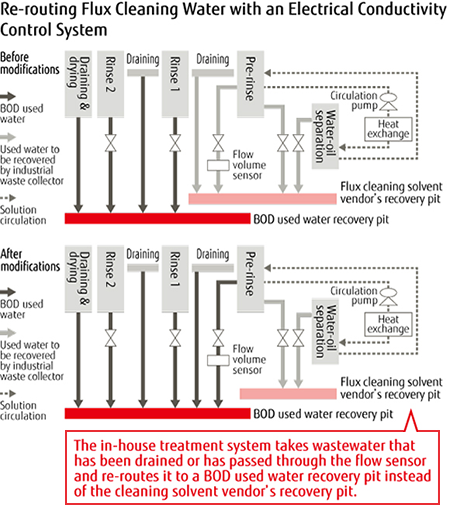