At Fujitsu Finland, we have been using 100% renewable energy from hydroelectric power since April 2014 in our 4 data centers, a distribution center, offices and some other facilities. 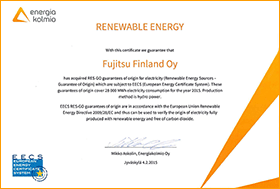 Concluding an Agreement to Purchase Solar Generated Electricity in the U.K. (FY2014)

Fujitsu UK & Ireland has concluded an agreement to purchase electric power generated by a photovoltaic system installed on the roof of their office building by LCPF. The panels were installed in February and March 2014 and have been operating since April of the same year.

In the half-year up to September 2014, the system generated 34,907 kWh of electricity, which was equivalent to 3.5% of the total power consumption on site. 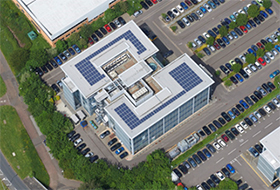 Solar power generation that has rapidly spread in recent years has the advantage of addressing peak periods of power consumption because it generates more power during the high demand times of mid-day and during the summer. However, power output changes greatly with fluctuations in the weather, making it difficult to effectively use solar power to meet demand. With this challenge in mind, Fujitsu developed technology for optimizing battery usage so that solar power can be effectively used to mitigate peak periods of power consumption.

This technology predicts over 10,000 scenarios simulating a variety of possible supply and demand situations based on the weather. Using these scenarios, plans for optimum battery usage are created in advance and stored in a database that selects and changes plans in response to supply and demand for power. In verification tests of the system at the Kawasaki Plant, peak periods of power consumption were mitigated an average of 23% during the operation period from July 2012 to June 2013. We were also able to confirm that repeatedly altering battery usage plans can steadily improve the effects of mitigating peak periods.

This battery optimizing and control technology is one of the results of projects that Fujitsu has quickly adopted in-house as part of our effort to effectively utilize a microgrid for bringing about local production and local consumption of green energy. The microgrid makes use of small, dispersed power sources, combined with batteries and other technology. Going forward, we will strive to develop further technology for effectively utilizing inherently intermittent natural energy.

Solar panels and batteries used in the verification tests

Dashboard showing the operating status of our microgrid

In October 2013, we installed solar power generation facilities with generation capacity of 200 kW at the Kumagaya Plant, Fujitsu Wireless Systems Limited, in order to reduce our amount of power consumption and limit peak periods of consumption. We are trying out various approaches, such as spreading water on the solar panels to keep their surfaces from overheating, to maintain maximum power generation efficiency. As a result of installing the facilities, we have been able to reduce power usage at the entire plant by approximately 10%. 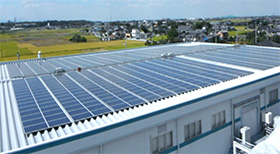 Renewable energy has been garnering increasing attention not only for reducing CO2 emissions but also for lessening energy supply-related risks. The Group has deployed and is evaluating the performance of its first geothermal heat extraction system at the Nagano Plant in Japan.