Fujitsu Australia succeeded in locating its habitat for plants that are afraid of extinction (endangered species) in the state of New South Wales.

Fujitsu is supporting the forest conservation efforts of BirdLife International Tokyo in the Hutan Harapan rainforest in Sumatra, Indonesia. Fujitsu has contributed 3.3 million yen for the purchase of ICT devices, with the goal of increasing the efficiency of forest patrols.

Since 2002, Fujitsu Group has been conducting a tropical rainforest regeneration project at the Fujitsu Group Malaysia Eco-Forest Park located in Sabah, Malaysia, on the island of Borneo... 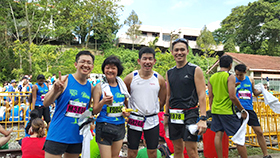 More than 20 members of Fujitsu Asia Pte. Ltd. participated in the Green Corridor Run 2016, held in Singapore in March 2016. In addition, 6 employees and their families also participated in the Water Challenge held at the same time to contribute to improvement in access to safe water. The event raised 1,800 Singapore dollars, which was donated to the NGO, Charity: Water. 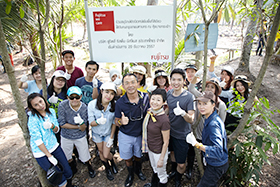 In December 2014, Fujitsu Systems Business (Thailand), Ltd. (FSBT) and the Royal Forest Department entered into a three-year agreement aimed at contributing to the preservation and expansion of green belts in Thailand. A tree-planting event was held on December 20, 2014, with 42 employees of FSBT taking part in the planting of 400 saplings in a park in Bang Krachao, Samut Prakan Province, on the outskirts of Bangkok. 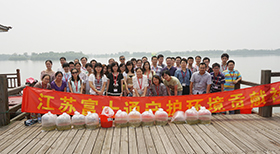 Fujitsu Finland has participated every year since 2009 in the Kilometer Race, an event in which teams of cyclists race to cover the greatest distance. The race aims to spur the switch from automobiles to bicycles as a means of commuting and private travel, thereby reducing the impact of everyday transportation on the environment.

Fujitsu also took part in a concurrent charity event held by the Finnish Red Cross. Fujitsu Finland contributed a total of 10,000 euros to disaster aid, the greatest amount contributed by any of the more than 2,400 teams participating. 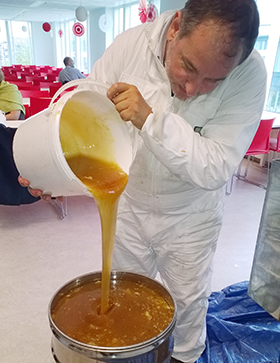 While bees play a key role in biodiversity, their number has been declining in recent years. Partnering with expert organizations, Fujitsu Technology Solutions EE has made an investment of 8,000 euro to place beehives on Fujitsu rooftops in Brussels, Belgium and in Luxembourg.