Approximately 150,000 employees are active across the world in the Fujitsu Group. We would like to grow as an organization together with each employee by embracing individuality and bringing together a diverse group, without bias toward nationality, gender, age differences, or disabilities.

Based on the statement "We respect diversity and support individual growth" in the Corporate Values of the Fujitsu Way, in 2014 the Fujitsu Group organized its policies on diversity and inclusion as follows, and is working as a Group to further promote these.

The Fujitsu Group will undertake the promotion of diversity and inclusion, primarily initiatives aimed at nine attributes with the following three objectives, and will connect this undertaking to strengthened competitiveness as a company. 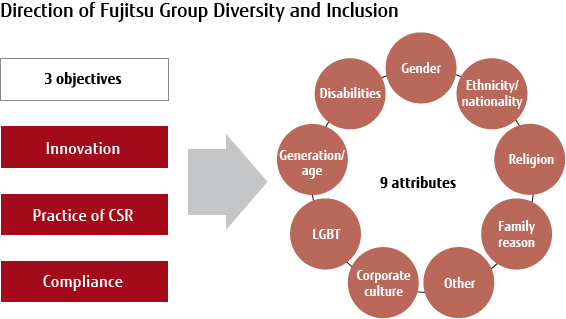 To achieve these two objectives, we are aiming to create workplaces where people can work energetically, create new value, realize coexistence and mutual prosperity with society, and develop Fujitsu into an even better company.

Our Framework for Promotion of Diversity

The Diversity Promotion Office engages in the promotion of diversity under the company President and the officer in charge of diversity (the current Vice-President).

Overseas, Fujitsu promotes diversity within each of four regions while sharing information at venues such as the Global Director's Meeting for Human Resources Conference.

To review the status of its diversity promotion, Fujitsu has been carrying out an annual survey on Diversity and Inclusion, aimed at all corporate officers, employees and temporary staff. The survey, together with other sources of information, revealed four items to be addressed by the company: management by supervisors, the workplace environment, awareness among individual employees, and work-life balance. Based upon these, we are placing our focus on undertaking three key activities: reform of mindset and culture in the organization, support for individual success, and reform of way of working.

From FY2017, based on the Stage 4 theme of “Further Practice/Business Contribution”, we will implement a variety of new activities in addition to continuing and expanding existing activities.

In addition to working on targets specific to Stages 1 to 4, we are also implementing the following measures across all three Stages.

As an immediate high-priority issue, Fujitsu is setting quantitative targets to reliably create significant numbers of female managers, while promoting activities to achieve these targets.

In more specific terms, we are selecting female employees who are or could potentially be team leaders and, in coordination with the relevant workplace, management level, HR division, and the Diversity Promotion Office, establishing and implementing training programs appropriate for these individuals as candidates for promotion. For other levels of employees, we also hold workshops and events to encourage them to review their careers and envision their future career path. We are also planning and implementing networking events as opportunities to receive fresh encouragement from others.

Note that we use the same recruitment standards regardless of gender with respect to promotion of managers at Fujitsu. 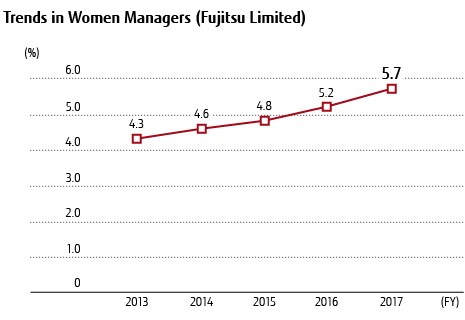 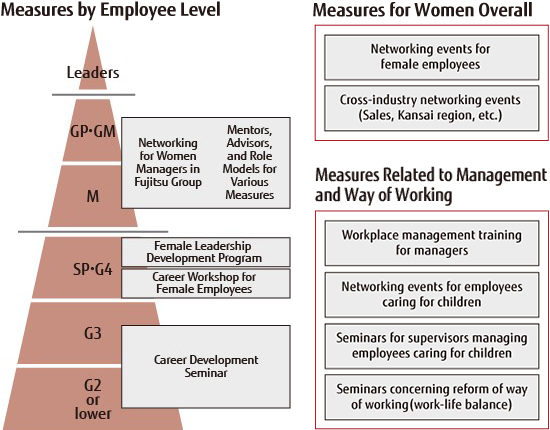 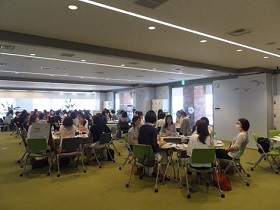 Fujitsu has initiated the Female Leadership Development Program, designed to support long-term career furtherance by its female employees. Through the program, Fujitsu is developing human resources to serve in leadership roles, while grooming future management staff.

Open to members selected by each division, this roughly half-year program seeks to boost awareness of career options and develop managerial skills through intensive classes centered mainly on team activities, coupled with on-the-job training. Diversity mentors, acting as team activity advisors and role models, provide advice and guidance, and each team offers its own suggestions to management at the end of the program.

To enhance effectiveness, the program is conducted in coordination with key staff members from worksites, management, personnel, the Diversity Promotion Office, and Fujitsu University, who all work together for the program's success.

Over 60% of all program graduates have already earned promotions, an achievement that testifies to the program’s importance in helping women flourish.

One of Fujitsu’s new measures for FY2017 was the full-scale start of the Career Workshop for Female Employees, which was held on a trial basis last fiscal year.

Tailored to leadership class-ranking female employees at various sites, the program brought participants together for conversations with several role models and discussions with top management in an effort to help women secure appointments and promotions. Participating in the program allows female employees to dispel their own preconceived notions of executive appointments, broaden their career options, and nurture the kind of far-reaching perspective that higher-ranking positions demand.

Through group discussions and lectures by role models inside and outside of the company, this program aims to foster a mind-set for taking on daily challenges and to foster mid- and long-term career consciousness aimed at sustainable growth of the individual.

Starting in FY 2011, we have been setting up "diversity mentors," selected from the ranks of upper level female managers, who will support the personal and career development of our female employees from a different standpoint than their immediate supervisors. Diversity mentors act as advisors for team activity in the above Female Leadership Development Program, offering advice and guidance as role models for program participants.

We also conduct dialog circles led by diversity mentors and officers on the theme of active participation by women. 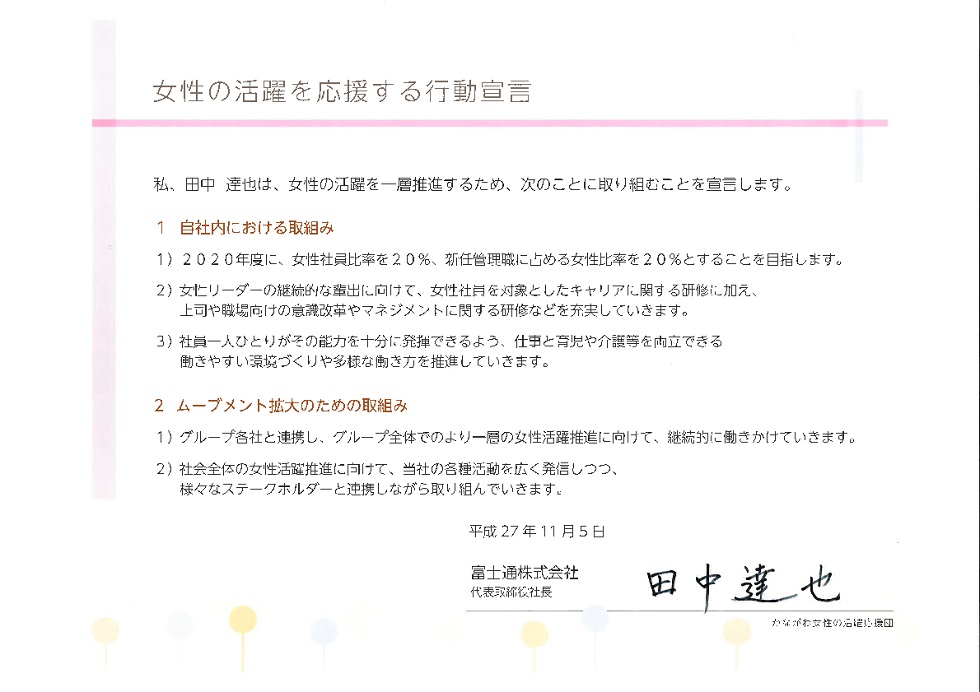 In November 2015, Fujitsu became one of the supporting companies of the Kanagawa Women’s Activity Support Group, an entity consisting of top officials from local governments (Kanagawa Prefecture), companies, universities, and other organizations to support women’s activities. In this initiative, supporting members communicate the related initiatives of their own organizations in the form of declarations of conduct, with the aim of generating a movement to support women’s activities in society overall.

All members of the support group are men, selected from top management of companies that are headquartered in Kanagawa or have major workplaces in the Prefecture, and that are proactive in initiatives to help women exert their capabilities and be active. In FY2015, the group consisted of top management from 10 corporations and was headed by the Prefectural Governor.

At the formation ceremony on November 5, 2015, Fujitsu President Tanaka delivered a declaration of conduct aimed at expansion of the movement to promote activity by women.

Welcoming 10 new member companies in FY2016, the group is working to energize its activities.

Supporting the Active Roles and Promoting Employment by People with Disabilities

To hire people with disabilities, we have prepared a pamphlet for students with disabilities and included in it specific information such as interviews with current employees with disabilities, Fujitsu's perspective on hiring people with disabilities, and the range of jobs available once a person is hired. We hope this assuages any anxiety and conveys an environment where anyone can actively work, with or without a disability. Correspondingly, we implement long-term follow up from initial human resource development until the employee is established, so that workers can stay with Fujitsu for the long term. One example of this is training for new employees and interviews together with their workplace in order to bring out the best of the individual's abilities. 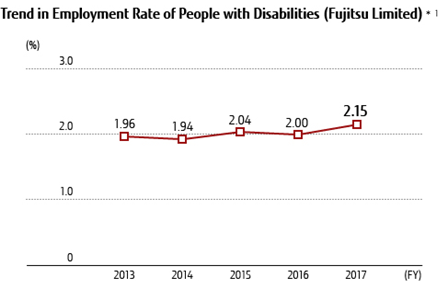 Fujitsu holds forums aimed at supporting the active participation of employees with disabilities. In FY2017, under the theme of “creating a workplace where anyone can perform,” we held lectures by outside guests and lectures by Paralympians at Fujitsu. At the end of the forum, all participants (even those without disabilities) participated in a game of the Paralympic sport Boccia. All participants really enjoyed the opportunity to become more familiar with the Paralympics. 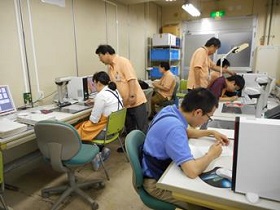 Fujitsu establishes special subsidiaries to provide more forms of employment for workers with disabilities. These subsidiaries give consideration to the particularities of each employee's disability and aim to be workplaces where these employees can play a more active role.

*2 Special subsidiary:
A subsidiary that requires authorization by the Minister of Health, Labor and Welfare and is established with particular consideration for people with disabilities.

Recruitment of and Support for Active Participation by Global Talent

With sights on global business expansion, Fujitsu takes part in career events in and outside Japan geared to foreign students, as well as holding its own seminars and accepting university students from abroad for internships. Through these and other actions, Fujitsu is recruiting foreign nationals studying in Japan and university graduates from other countries, bringing the total of foreign nationals working at Fujitsu to 383 as of March 31, 2017.

Support for Foreign Employees in Japan

Fujitsu launched the Integr8 project in 2007 to enable foreign national employees to contribute and utilize their full potential. We have since undertaken the creation of good working environments for these employees.

At the launch of the project, we set up a system in English on our intranet to field questions and requests for consultation, and created an intranet to explain rules, regulations, personnel-related procedures for activities such as business travel, the visa acquisition process, living necessities, and so on, to help foreign national employees settle into the Fujitsu organizational environment and life in Japan.

Since then, Integr8 has expanded the scope of its activities to encourage cross-cultural interaction among employees of differing nationalities and to support the international integration of Fujitsu workplaces. With the goal of supporting the formation of global society within the Fujitsu Group and fostering a mindset that accepts cultural differences and embraces diversity, the program holds lectures and other events, including discussions aimed at the supervisors of foreign national employees.

Fujitsu held a workshop to share best practices involving the issues faced by foreign nationality employees and the management issues faced by their supervisors. The workshop, which targeted department heads who manage such foreign employees, made use of the Practical Manual for Making Use of High-Level Foreign Human Resources that was planned and produced by Fujitsu Research Institute under contract by the Ministry of Health, Labor and Welfare.

Expansion within Group Companies in Japan and Overseas

In order to further promote our activities for global diversity, at venues including our Global Director's Meeting for Human Resources Conference, we share the status of progress and best practices in each company and region while communicating our Group-wide policies on diversity and inclusion. In FY2017, we implemented a global survey on the status of progress in each region. We will use the survey results a basis for further strengthening collaboration.