As part of the Fujitsu Group's social contribution and environmental activities, Fujitsu sells its own private brand beverages to employees, a portion of the proceeds of which are directed to tropical rainforest restoration activities underway at the Fujitsu Group Malaysia Eco Forest Park. As of the end of FY2017, a total of around 3.20 million beverages had been sold since the start of this initiative in 2009, which has helped contribute to promoting activities.

Activities that Contribute to Society by Group Employees

Employees participate in the "sutenai seikatsu", or waste free lifestyle, activities. "Sutenai seikatsu" activities are intended to support Shapla Neer (Citizen's Committee in Japan for Overseas Support), an international NGO engaged in volunteer activities, by donating the sales of used books and DVDs collected from employees. 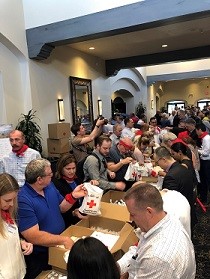 Fujitsu have had a long history of working with charities, in 2017 we decided to put our collective strength behind one.

To select our first formal charity partner within Fujitsu Americas we developed a robust, fair and transparent process. In making the ultimate decision, voting was opened to all colleagues across the Americas.

Since 2017 Fujitsu have raised over $138,000 for disaster relief including donations from a new Fujitsu-matched funding scheme. In May of 2018, we provided over 1,200 disaster kits to the Southwest Region of the US, where they were running dangerously low. The kits were assembled by 300 volunteers, and included emergency supplies and a hand written note to encourage the eventual recipients to have hope. Fujitsu received the Silver Partner Award from American Red Cross in July of 2018 for its work.

Throughout 2018, Fujitsu will continue to drive activities with the Red Cross to support their mission, including additional individual and team activities and fundraising. 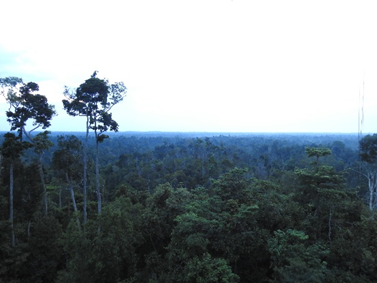 The Hutan Harapan rainforest is a massive forest, about half the size of Tokyo, located on the southern side of the island of Sumatra. This is the first area in Indonesia set aside by the country's Ecosystem Restoration Concession, and rare animals still exist in the area. There are also activities to restore the secondary forests that were former commercial logging sites to the original ecosystem. Such activities are important and significant in improving the forest's ability to serve as a carbon sink, thereby limiting global warming.

Forest patrols are currently being conducted as an urgent response to large-scale forest fires and illegal logging in the Hutan Harapan rainforest. Because it requires time and effort to carry out patrols and aggregate information, however, such endeavors have limited the amount of resources allocated to the original mission of forest restoration. Fujitsu has contributed 3.3 million yen for the purchase of ICT devices, with the goal of increasing the efficiency of these patrols.

Going forward, the Fujitsu Group will continue to support forest conservation and restoration efforts, contributing to the mitigation of climate change.

Support for Damage from Natural Disasters

The Fujitsu Group is carrying out donation and contribution campaigns in order to assist with efforts to recover from the damage caused by natural disasters.

For examples of overseas cases where we donated and contributed to support natural disaster recovery, please see below (cases in Japan are covered on our Japanese website )