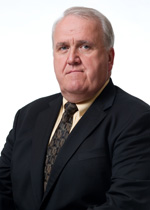 Dick Zarski Executive Vice President
Richard (Dick) Zarski has been with Fujitsu for over twenty years and is Vice President of Manufacturing, Supply Chain and Logistics for Fujitsu Frontech North America (FFNA). With over 25 years experience in high technology industries, he brings a strong mix of new product launch, manufacturing, supply chain and logistics management, quality and service parts logistics experience to his role. He brings a wealth of industry knowledge and management experience to his role in the company.

Mr. Zarski has particular strength and focus in logistics process and quality. He is responsible for ISO 9001:2000 certification for FFNA, and they have received numerous Best Practice nominations by external auditors BSI and DNV. This dedication to quality aligns well with his commitment to operational excellence for our customers. Operationally, he has successfully implemented Toyota Production System (TPS) processes in FFNA’s manufacturing operations.

Additionally he was responsible for the launch of a new Reverse Logistics Operation for Fujitsu America which has driven considerable improvements and efficiencies in the supply of parts to its customers and service organization.